On Thursday, September 7, 2017, Pastor Aldo Siahaan of Philadelphia Praise Center gathered with hundreds of others in front of the Philadelphia Mayor’s office. They gathered for the New Sanctuary Movement of Philadelphia’s Fight Live Stop, Defend DACA event. Pastor Aldo stated, “It is important for me to be here as these issues affect my congregation and broader community.”

Live Stop is not something well known to the general public but all too familiar for undocumented and low income families in Philadelphia. Many, even though they are unable to obtain a driver’s license, must drive for work purposes, doctor’s appointments, or general

errands. Should they be stopped by police and found to not hold a driver’s license, or have the car properly registered, in addition to other reason, Live Stop instructs the police officer to immobilize the driver’s car, often  towing it immediately. In order to retrieve the vehicle a driver must show a license and registration to the Traffic Court and pay fees of $500-$2,000 all within 15 days. If not met within the 15 days the vehicle is sold at public auction. This law applies only in Philadelphia as other counties have not adopted it.

According to a study done by law students at Temple University’s Center for Social Justice, “The law instructs that cars should be towed for these violations only as a last resort if the cars pose a threat to public safety. Yet this is often not the case because the Philadelphia Police Department’s interpretation of the law goes beyond the state law’s requirements by towing first…this has had a disproportionate impact on undocumented immigrants in Philadelphia.”

Pastor Aldo was among a delegation that delivered over 3,200 signatures on a petition asking Philadelphia Mayor Jim Kenny to allow 30 minutes for a person who is subject to Live Stop, to call and have a licensed driver retrieve the vehicle, thus avoiding the vehicle being towed and impounded. A small change that would have a huge impact on the undocumented and low income families in Philadelphia. They would still be subject to paying the violation ticket, but would not have the added cost of the towing and impoundment. 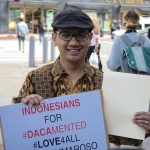 While the Fight Live Stop event had been planned for some time, it came the week that President Donald Trump revoked Deferred Action for Childhood Arrivals (DACA), a program implemented under the previous administration, allowing for undocumented people who were brought here as children to remain in the country as long as they were in school or working. It was thus, critical for New Sanctuary Movement and their supporters to not only speak out on Live Stop but to also Defend DACA, imploring the mayor to make a public statement in support of DACA.

The day began with Pastor Aldo leading an opening prayer, speakers spoke on how Live Stop affects them, and DACA recipients spoke of the blessing DACA is to them and the pain this reversal causes. There was drum music between the speeches to keep spirits up and much prayer by the clergy present.

10% of Franconia Conference is made up of immigrants, they are a part of the Body of Christ and as 1 Corinthians 12:26 says, “If one part suffers, every part suffers with it.” On Saturday, September 9th the Leadership of Franconia Conference released A Pastoral Response to DACA, stating in part, “The law of our land is subject to the rule of Christ in our faith communities.  We continue to hear and respond to the admonition of Christ our Lord who said what you do to the ‘least of these you also do to me.’ We commit to continuing to be communities of support, of love and solidarity with the most vulnerable among us.  We work and hope for the day when justice will fall down like rain and righteousness will flow like a mighty stream.” To read the whole statement click here.

When asked what people can do to support Pastor Aldo and those in the community directly impacted by these issues he said, “speak to your lawmakers, local and federal, use your voice to speak on our behalf.”