In order to bring teens “together despite differences”, Eastern District and Franconia Mennonite Conference held their annual Youth Worship Gathering on June 4, 2016. The theme of the event was “Built together in Christ”, and was led by Chantelle Todman Moore, Philadelphia Program Coordinator for Mennonite Central Committee. 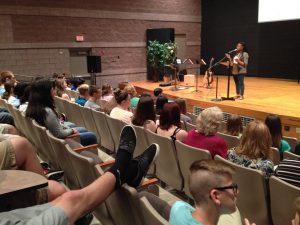 According to Christian Zeo, Doylestown Mennonite Church, the theme helped to “bring us all together under Jesus.”

The message that Todman Moore delivered also resulted in a positive responses.  “It put flesh and blood on the idea of Christ,” said Doylestown Youth Leader Brandon Landis.

As well as a message, the gathering also had many times of worship throughout the event, which were led by Nathan Good, Associate Pastor at Swamp Mennonite Church, and Danilo Sanchez, Leigh Valley Youth Pastor for Ripple, Whitehall and Vietnamese Gospel.

According to Zeo, the songs get people to express what they normally can’t. “Besides the messages, the songs had an upbeat feel,” said Zeo. “Most songs are too solemn.” 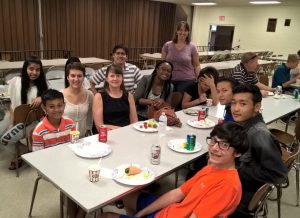 This event is held biannually, the first weekend of June following the Mennonite Historians Whack and Roll event. Usually the youth enjoy time outdoors under a big tent on the Mennonite Historians’ land in Harleysville. Due to the rain, the event was moved indoors to Christopher Dock Mennonite High School. Yet, the rain did not keep the people away; over 12 youth groups participated, including those from Doylestown, Ripple, Whitehall, Blooming Glen, Deep Run East and Deep Run West and many more.