Elizabeth Stover and her husband (Preston) of Dock Woods Community were out walking on the path in the beautiful woods connected to the Community. Coming toward them was a young man with his small playful child. He was hanging on to his legs so it was a “conversational moment.” The young man (Insoo Lee) said that he was Korean and the youth pastor of a local Korean church in Landsale. Elizabeth invited them to their home for a dinner. Since she was a leader of a prayer group at Dock Community she also invited Insoo to come and speak to the prayer group.

At that meeting Insoo found out about the Worm Project and invited Claude Good and his wife (Alicia) to present the project to the young people of his church. They were met with overwhelming enthusiasm by the Korean young people in addition to the wonderful Korean food served by the group. Some of them wanted to take the contribution containers to their school classrooms to encourage their classmates to contribute as well.

That small group of enthusiastic young people was able to pull together $1,000.00 in a few months! The Worm Project is able to buy a de-worming pill for just $0.02 each when bought by the million. It is a mint-flavored, chewable pill that only has to be administered once every six months. That one pill can save enough food from the worms to help a child have, on average, an extra 10 lb.of food during those six months. So at $0.02 each, $1,000.00 will buy enough pills to treat 50,000 children! But it will be even more than that – Insoo says that the youth want to keep the contribution containers to continue raising funds for the very poor “wormy” children of the world! 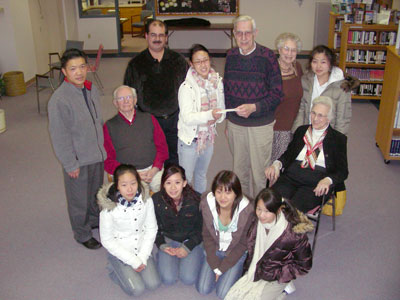