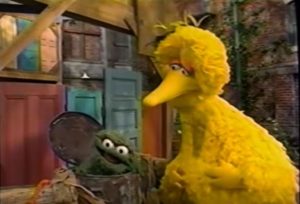 I’ve studied Spanish off and on for nearly 40 years. My initial introduction happened via Sesame Street on TV with some Spanish interspersed between Oscar the Grouch and Big Bird. I then learned some basics at West End Elementary School. Much of that remains readily in my brain — even the crayons that were adhered to the wall of my classroom at West End Elementary.

For two years in high school, I studied Spanish with Ruth Y. Hunsberger, who after her time serving at Academia Menonita Betania, added a PA Dutch and Boricua accent to my Spanish pronunciation. I picked up more Tejano Spanish in San Antonio after serving a summer with Mennonite Mission Network in San Antonio which catapulted me into a more advanced Spanish class than probably was appropriate at Eastern Mennonite University where I studied as an undergraduate. I never got my language construction quite right after that.

Since then, I’ve studied several other languages a bit. I grew up in a household where my Grandpa spoke Slovak and snippets of other European languages. I was raised with an understanding that knowing some of the language of the neighbors could be valuable. Today, my immediate next door neighbors speak Spanish. 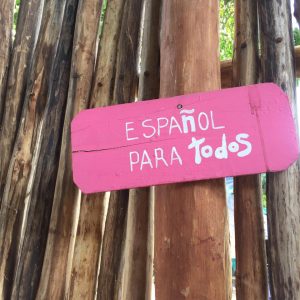 Earlier this year, for three weeks, I took the time to re-immerse myself in Spanish.  I chose a school removed from familiar communities so that I’d have to be a student only.  Though I did some work from Mexico, my immediate environment was school and navigating through an attempted Spanish upgrade. It was both humbling and invigorating.

After three weeks, my comprehension has improved. My colleague Noel Santiago and I are able to have conversations we haven’t had before in Spanish. I’m trying to practice every day, which so far has more often seemed endearing than annoying to those who’ve had to endure my commitment to keep practicing, even if it’s only when I’m ordering enchiladas.

While studying, I was reminded of the beauty and brokenness of the world. As a student in a secular language school, I found many people seeking and searching. My co-learners came from all over the world to a small city in Mexico’s Yucatán Peninsula to learn, to relax, to find something. I was invigorated by learning alongside them in their search. Admittedly, more often than not, the church was far from conversation and their search. Some were curious about my work and spirituality. Others avoided the conversation even when it surfaced. 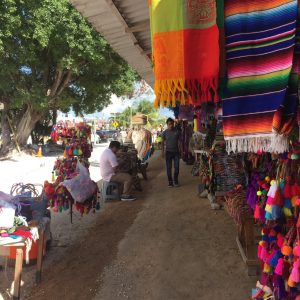 But in these three weeks, I was reminded of my own call to serve the church as a pastor. It was a reminder of the commitments that I made to search out ways that the Gospel might really mean hope, freedom, and redemption for persons who are seeking and stumbling, for those who need comfort as well as those who need to be discomforted. It was a reminder to pay attention to all that is beautiful and broken, to find times when I might also be able to say as Jesus did, “the reign of God is near.”

I’m back with better Spanish, but I’ll have to struggle every day to maintain it. Next month, Marta Castillo will head to Indonesia to get an upgrade on her Indonesian language skills, so that she’s better able to accompany our Indonesian speaking communities as well. As a Conference, we are committed to having a multilingual ministry team, not only because it’s chido (cool) but because it also represents the work of the Spirit at Pentecost to bring the Good News to all people.

It’s our ongoing commitment as disciples, as leaders, as pastors, to extend the Good News to all people, until God’s reign comes in it’s fullness.  We are in it together.  Bersama.  Juntos. cùng với nhau. The beautiful and broken world is waiting to hear us.