The following are excerpts on the Winter Peace Retreat Report.  For the full report from the Peace and Justice Committee visit efpjc.ppjr.org/pjnews/pjn1803.pdf. 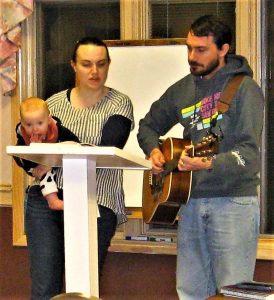 On February 9 to 11, around 50 participants gathered at St Mary of Providence Retreat Center in Elverson, PA to participate in the 2018 Eastern District and Franconia Conference Winter Peace Retreat. This year’s theme was “Immigration, Sanctuary, and the Church”.

The weekend began with a family activity led by Tammy Alexander, Senior Legislative Associate for Domestic Affairs in the Mennonite Central Committee (MCC) Washington, Office: “People on the Move: A Migration Exercise”. The activity sparked conversation around what people go through when they are uprooted from their homelands, the sacrifices they are forced to make, the struggles they endure and the questions they carry with them about safety and what they may encounter in a new land.

Peter Pedemonti, co-founder and Director of New Sanctuary Movement Philadelphia, shared about his own family’s migration journey, his father from Italy and his mother from England. Settling in Hartford, CT, Peter grew up with stories of why his family left Italy and some of the struggles they had when they came to this country. He shared how people often took advantage of his grandmother because she didn’t speak English. This is a frequent experience today for immigrants of color in the U.S. when compared to the relatively privileged status of white immigrants.

Peter also shared the origins of New Sanctuary Movement of Philadelphia, a grassroots organization led by affected immigrants to “win immigrant justice campaigns with our members across nationality, faith, class, and immigration status.” When Peter came to the Philadelphia to join the House of Grace Catholic Worker, it was at a time when there were growing rates of workplace raids and immigrant deportations, and proposed legislation in the U.S. Congress was hostile to immigrants. During this time a small group of clergy, immigrants, and allies started coming together about the situation. They discovered that a lot of people in Philadelphia were engaged with immigration issues, but nobody was organizing in the faith community. So, little by little, they began organizing in coffee shops and in living rooms, until one day they had a movement. Peter then left the Catholic Worker and started to do this full time.

According to their website, New Sanctuary Movement of Philadelphia is “an interfaith, multicultural immigrant justice movement organizing communities to end injustices against immigrants, regardless of status”. This is done through partnering and educating faith communities. Currently working with 28 congregations including two Franconia Conference congregations, member congregations assist in trainings, workshops, campaigns, and accompanying families facing deportation.

One of the ways presented to participants at the retreat that congregations can get involved is accompaniment – walking with families facing deportation. Accompaniment is not to provide legal representation.  People who provide accompaniment aren’t lawyers; what they do is stand in solidarity. Much of it is going to court – just showing up in immigration court or criminal court or probation check-in with a group of 5, 10 or 15 people, as a witness. They form a little prayer circle in front of the court.  They come in and wait in front of the court room with two goals in mind: (1) surround the person with community, and really have their back in that situation; and (2) command accountability, because the people in the court know that folks are watching them. It’s not that the presence of NSM will automatically win the case, but there have been occasions when after the person’s case is presented and seven people stand up to leave, the judge asks, “Oh, is that the New Sanctuary Movement?”

There is something uplifting about having that visual representation of God’s presence in the courtroom. Bringing the power of God’s love into that environment does something to bring people hope. There are many times when NSM has seen people win cases that they did not think were possible – when people come out of it saying, “This is a miracle; this is God.” For those of us who are immigrant allies not directly affected by immigration law, this is an opportunity to see how the system works and moves us into exploring why so many people are in detention and deportation.

Immigration is a large part of the Franconia Conference and Eastern District story. Our ancestors were immigrants to the Franconia area and we are honored to learn from and walk with our more recent immigrant brothers and sisters. If you are interested in learning more about the immigration stories in Franconia Conference, contact the Conference Office for a copy of a short documentary complete with discussion guide that can be used in Sunday School or other formats.