We asked for stories from summer activities from around the Conference and got this jewel from Kim Moyer, Blooming Glen congregation: 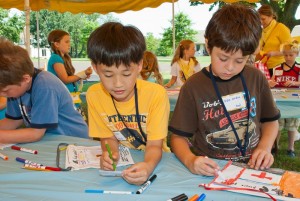 The theme for our Summer Bible School was “Be Bold! God is with You!” The children learned through songs, dramas, stories, crafts, and games, that God is with them, even when they are scared.

One mother told me a story about her 5 year old son who has always been afraid to go into the basement of their home by himself.  The week after SBS, he asked his mom to go with him to the basement so that he could get his blanket.  His mom couldn’t go with him at the moment, so he decided he would try to go by himself.  When he returned to his mom with his blanket, he told her, “I was able to go down in the basement because I kept telling myself, God is always with us, God is always with us.”

A piece of SBS that caused a lot of excitement among the children was an offering project competition between the girls and the boys.  The children were raising money for a Mennonite Mission Network project, which sends children in South Africa to Bethany Bible School, a camp that teaches the children about Jesus.  It costs $20 to send one child to the camp, and the boys and girls at SBS were competing against each other to send the most children to camp.  If the boys won, then the Children’s Ministry Director (me) would get a pie in her face, and if the girl’s won, then the Lead Pastor would get the pie in his face.

The children took this competition seriously and were bringing in their piggy banks, doing extra chores to raise money, and asking grandparents to write out checks.  By the end of the week, the 70 children at SBS collectively raised $1,162.53, sending 58 children to Bethany Bible School!  Although the boys won, and I got a pie in the face, it was decided that the real winners were the 58 children that would now be able to attend the Bible Camp.

Thanks, Kim, and everyone else who shared their photos and stories this summer!  And if you haven’t already read them, check out these stories about Peace Camps, Bethany’s anniversary celebration, a special service at Plains, Salford’s listening project, Kingdom Builders construction in Philly, Germantown Historic Trust’s painting project … and this is just some of what has been happening in our Conference this summer.

Enjoy these fun photos that were taken at camps, picnics, outdoor services, Bible Schools, and more.  If you’d like to add photos from your congregation’s summer to this gallery, send them to Emily with captions and photo credits.