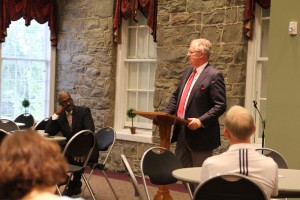 Swartzendruber began the meeting by sharing about experiences throughout his career that challenged him to offer pastoral care for persons struggling with questions of sexual identity. As a recent seminary graduate beginning his first pastoral assignment at Salford congregation (Harleysville, Pa.) in 1978, Swartzendruber felt ill-prepared; he doesn’t remember learning about same-sex relationships in seminary.  “I had no idea how to respond,” he recalled.  These questions continued to follow him throughout his career in Mennonite education and as president of both Hesston College and Eastern Mennonite University.

These experiences led Swartzendruber to root the University’s consideration of employment policy changes in contexts of real people and real situations.  “Your feedback is more valuable to me if I know you’ve really walked through the pain with families and individuals,” he reflected.

Swartzendruber explained that questions and perspectives from students have driven him to lead the listening process and consider change.  “For me, it’s all about the young people… I really care about the next generation,” he shared.  He is becoming increasingly aware that students’ response to the conversation is as much about the process as the result.   “I met with the pastoral staff [at EMU] and they told me, ‘The students on campus are watching how we do this … and they’re trying to decide, do I want to be a part of the church?’”

Swartzendruber explained the realities on campus that led to the listening process:

Swartzendruber then answered questions from conference pastors about the listening process, the relationship of the university to the denomination, and steps moving forward.  The president’s cabinet led the listening process by facilitating about 20 listening circles, with up to 20 students or faculty and staff per session, he explained.  They then brought what they heard back to the rest of the cabinet and will consider those responses, along with what they heard in a survey and other communication from alumni and church leaders. They have begun processing that feedback and will write a recommendation to send to the EMU executive board and then the board of trustees in June.  The University’s board will make the decision to accept, reject, amend, or table the proposal.

Lorie Hershey, pastor of West Philadelphia congregation, was impressed by the thoroughness and intentionality expressed in the process.  “I think we need these listening circle places,” she told Swartzendruber.  “That’s where the Spirit can move, in relationships—not changing people’s minds, but relationships…. That’s transformative.”  Her hope was that the broader church could find more places for similar conversations, she said, conversations that “give one another space to respect each other, to not pull each other into camps.” 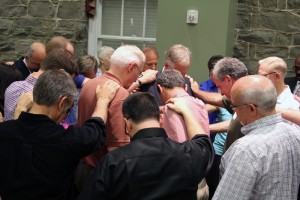 Swartzendruber acknowledged that these kinds of conversations surface anxieties in the church.  “Practicing non-anxious presence doesn’t mean you don’t have anxiety,” he said, “it means you don’t lead out of that anxiety.”  Learning to manage and respond to fear in healthy ways is a missional impulse, he said. “Who wants to join people who are afraid all the time? … What kind of evangelistic strategy is that?”

As the meeting ended, the pastors gathered around Swartzendruber and other EMU staff to pray for the continued process, acknowledging the ongoing struggle and pain all church leaders face during this difficult time.

After the meeting, “I heard and saw many persons engaged in some deeper discussions and I think that leads to better understanding of one another,” observed Mike Clemmer, pastor of Towamencin congregation. “I continue to be hopeful as we struggle together…. Overall, I was reminded that we need to keep praying for one another – no matter what!”

Learn more about EMU’s listening process on their website.

All meaningful conversations should happen around a table filled with good food.    This particular Sunday afternoon, as we laughed together and swapped stories, the conversation inevitably drifted to human sexuality.

“Is this what your legacy is going to be?” I asked Loren Swartzendruber, president of Eastern Mennonite University.  The university has been in the midst of a listening process to discern the future of their hiring practices related to faculty and staff in same-sex relationships.  Just that morning, Loren had visited my congregation to share an update.

“I think it will be,” Loren responded, a little resigned.  As a former pastor of Franconia’s Salford congregation (Harleysville, Pa.) and a former president of Hesston College, Loren’s life has led him through many other challenges of leadership as well as his share of victories.  It’s not that he didn’t feel the issue of human sexuality was important, but, as he went on to explain, he had hoped that he would be remembered for more than just this one issue: as someone who was deeply committed to the Christian education and formation of his students, the development of his institution, and the future of his church.

He’s not alone in his feelings; I have heard many leaders sigh about how this topic is dominating conversation or jokingly wish that they had reached retirement before it had come to a head.  Some are concerned that the conversation is distracting us from the mission of the church while others feel that this decision is essential to our missional understanding.

It’s easy to try to outrun this conversation or to avoid it altogether.  As we look to the future, however, many of us are aware that we will be remembered not only by the decision we make but by how we behaved during this time of discernment: Did we lead toward division or unity?  Did we foster rhetoric or dialogue?  Did we model non-anxious compassion, confident humility?  Were others able to look at us and see a glimpse of Jesus?

Franconia Conference has designated a year in which we are building relationships across congregations, finding ways to share in mission and ministry, and learning to understand one another more clearly.  By investing in the difficult work of relationships, we hope that we will be able to engage in this conversation in 2015 with a deeper respect of and love for one another.

Will the controversy around same-sex orientation define our legacy as leaders?  Perhaps.  But maybe it will also be only one piece of a legacy that includes a new model of relating, a new passion for joining God in God’s mission in the world, a new commitment to unity and discernment.

May we be committed as much to the process as the outcome and may we seek our own formation as followers of Jesus gathered together in a community of faith, a sign to the watching world that we are Christ’s disciples (John 17).

Have a question for Loren Swartzendruber?  Then come out for a conversation sponsored by Eastern Mennonite University on May 15 at 7pm at Towamencin Mennonite Church (Kulpsville, Pa.).  This gathering is for all credentialed leaders in Franconia and Eastern District Conferences.