by KrisAnne Swartley, Pastor of Formation & Mission at Doylestown congregation

1 Corinthians 13:1-13 may be one of the most well-known passages of the Bible, but how often do we consider what it may be saying to us as leaders? At the most recent Faith and Life Gathering, we were invited to do just that.

As we sat around tables at Finland Mennonite Church, we shared the words and phrases that jumped out at us as we read. “Love is patient. Love is kind. It does not boast; it is not proud…. Love is not easily angered…. Love rejoices with the truth.” Many of us admitted our human struggle to lead from a place of love instead of leading from the desire to perform well, experience success, or receive the praise of people. 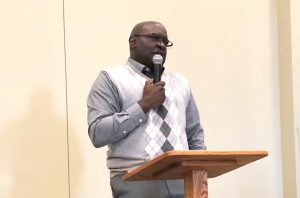 The morning’s presenter, Leonard Dow, explored the theme of love and leadership as he spoke to us from the stories of Jesus’ baptism (Matthew 3:13-17) and his transfiguration (Matthew 17:1-13). He reminded all of us that Jesus was loved by God before he accomplished or achieved anything; he was loved simply because he was God’s Son. What a powerful reminder to those of us who serve in ministry week in and week out: What we accomplish or fail to accomplish does not change our identity as the beloved of God. 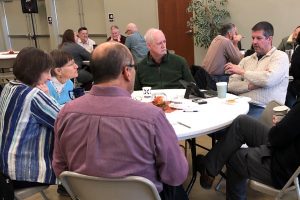 In table groups, we discussed questions about leading from love: When have we sensed God’s unconditional love? How did we respond to it? When have we been motivated by something other than love? What challenges do leaders who desire to lead from love face? There was a level of vulnerability to our conversation that felt healing. As we prayed for each other, God’s overwhelming love surrounded and held us.

I sense that if this one truth sinks into my soul this coming year, it could have a powerful impact on my ministry, my relationships at home, and in my community. I am loved. You are loved. We are all loved. God empowers us to live and to lead from love.

Leonard Dow is the former pastor of Oxford Circle congregation in Philadelphia and now works for Everence.  Watch Leonard’s full presentation here.  Faith and Life gatherings are held quarterly so that Franconia Conference credentialed leaders can pray and study Scripture together.  The 2019 dates will be February 6 & 7, May 8 & 9, and August 7 & 8.

On Sunday, March 14 amid joyful music and dancing, West Philadelphia Mennonite Fellowship (WPMF) celebrated the ordination of Lorie Hershey. The afternoon service welcomed participants from the many diverse communities that have shaped Hershey’s call to ministry, culminating in a litany of blessings and a liturgical dance that had everyone out of their seats and dancing in the sanctuary.

Focusing on Paul’s words in Galations 5:25 “since we live by the Spirit, let us keep in step with the Spirit”, Leonard Dow, pastor of Oxford Circle Mennonite Church, invited Hershey and WPMF to the “dance of cooperation” in which pastor and congregation participate in the movement of God’s Spirit.
Tracing the theme of dancing through the Scriptures from the prophetess Miriam to King David and into the early church, Pastor Dow, exhorted the congregation to trust that God will help us learn the right steps to move into faithful service in the world.

Three years ago, WPMF, an urban Anabaptist congregation extended the call to Hershey to be their pastor. Hershey, a 2005 graduate of Eastern Mennonite Seminary M.Div, moved to Philadelphia with her husband, Brent and two children, Dillon and Eden.

Sylvia Horst, chair of the WPMF Human Resources Committee shared the affirmations of numerous leaders and others in the congregation. Addressing Lorie on behalf of the congregation, Horst said, “Lorie, you have indeed shown strong and clear gifts in working with WPMF. As a leader you are steady and reliable, exemplifying integrity and a Christ-like spirit. You coordinate well, with appropriate attention to detail. At the same time, you are able to let go of plans when necessary to allow the Holy Spirit to work. You listen with insight for what God might be saying to us.”

Invited guests representing the varied congregations and church institutions that have helped to shape Hershey’s call to ministry offered blessings as she enters a new chapter of ministry. After each blessing, a bright colored strand of cloth was woven into a tapestry which was given to Hershey. During the reception that followed the service, attenders were invited to write a personal message and include it in the tapestry.
Franconia Conference Representatives, Noah Kolb, Pastor of Ministerial Leadership and Marlene Frankenfield, Conference Youth Minister, offered prayers and words of challenge to Hershey as she stepped into ordained ministry.

Julie Prey-Harbaugh, the worship leader, led the congregation in responding with the words, “Together as one body, we pledge to you our support that you might freely exercise the ministries of leadership committed to you. Our material gifts, our prayers, our counsel, and our encouragement support you. We pray that you may be given a deep love for those whom you serve and that Christ might be expressed through you in word and deed.”

John Pritchard, pastor of Calvary United Methodist, which owns the building in which WPMF worships and Rabbi Lauren Herrmann of Kol Tzedek Synagogue, read Psalm 150 in English and Hebrew.

A deep sense of gratitude to God permeated the service of ordination, heard in the joyful music, strong drumming and WPMF’s intergenerational choir’s singing of the African-American spiritual, “Guide my feet.” From the opening song, which celebrated God’s presence “Here in this Place”, the congregation, which is celebrating its twenty-fifth anniversary of ministry in Philadelphia, was led in a celebration of how God calls and raises up leaders to build up the church and extend God’s Kingdom.

In her response to the service, Hershey utilized the metaphor of the dance to describe her calling to WPMF. She said, “Ten years ago I couldn’t have imagined that I would be standing here being ordained. If I were to use one word for my journey to this point today it would be “movement”. Movement towards God, with God and movement in myself: towards wholeness in my understanding of God and myself. This congregation has been dancing for 25 years now. While some of the dance steps may have changed over the years, the DJ has remained the same.”

AKRON, Pa. – The board of directors of Mennonite Central Committee (MCC) U.S. has named J. Ron Byler as the organization’s transitional executive director. He succeeds Rolando Santiago, who has resigned as of August 2010 when his six-year term is complete.

For the next three years, Byler, of Goshen, Ind., will lead MCC U.S. while a long-term executive director is sought. He will be instrumental in guiding MCC U.S. through New Wineskins, an MCC-wide restructuring process.

In addition, Byler will oversee all MCC programs in the United States. He will coordinate four regional offices, as well as the Washington Office and the Akron-based national peace and justice staff. He will continue the priority of working closely with the supporting church denominations of MCC U.S.

The Rev. Leonard Dow, chair of the transitional leadership search committee and vice-chair of the MCC U.S. board, identified Byler’s faith commitment and lifelong understanding of Anabaptist values as foundational to Byler’s selection. He also noted Byler’s experience with organizational change.

“Transition is very much a way that God has gifted Ron,” said Dow. “Ron is sensitive to the dynamics of change, to the stress that accompanies it, while moving forward. ‘Courage’ is a word that was used when people spoke of Ron. In the midst of transition, we need to have courage in order to move forward.”

Dow also noted Byler’s familiarity with MCC’s complex organizational system, and his ability therefore to “hit the ground running” in his new role. Byler has been a board member of MCC U.S. since 2006, serving as treasurer for the past year.

During the past 13 years, Byler worked in leadership roles in Mennonite Church USA and one of its predecessors. Most recently, he was interim executive director for Mennonite Church USA. Earlier vocational experience includes stints with Mennonite Media Ministries and American Friends Service Committee.

Byler said that he was drawn to this role by the opportunity to help shape MCC at an important point in its history. He looks forward to collaborating with MCC Canada and the overall organization in providing “seamless oversight” to domestic and international programs.

“One of the things I value the most about MCC is our commitment to build bridges and connect people across their cultural, political and economic differences,” he said. “And I’m pleased that we respond to immediate needs, but we also work to address the root causes of injustice in this country and around the world.

“MCC is one of the few places where we come together as Mennonites, Brethren in Christ and Amish, regardless of our sometimes differing beliefs, to help others in the name of Christ. When we work together, we are a symbol of God’s intentions for the church and for all of God’s people.”

“We are deeply grateful that Ron is available for this key role in the MCC system,” said Ann Graber Hershberger, MCC U.S. board chair. “We are drawn to his love of the church and its mission, his careful approach to issues and his courage in leading change.”

Byler is a member of Eighth Street Mennonite Church in Goshen. He is married to Mim Shirk. They have one adult son, Jesse. Byler will begin his new position in July, allowing for some time of overlap with Santiago. He will continue to live in Goshen.