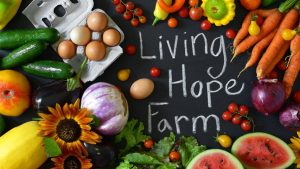 I came to Living Hope Farm in Harleysville, PA several years ago, excited for the opportunity to help manage a community-oriented organic vegetable farm. What I found when I arrived was a productive farm and a whole lot more. Living Hope is a farm with a mission – to help build a community that is more firmly rooted in the land, and foster stewardship and care for the Earth. We feed local people, offer opportunities for folks to learn and connect with the place where their food is grown, and work to train the next generation of farmers. In times when it seems like people are growing disconnected from the land and from one another, I am thankful to work for an organization that is striving to rebuild those connections.

Living Hope is a working farm, first and foremost, and our social mission hinges on being able to grow ample, high-quality produce. I’m proud to say that in the summer 2017 season we grew and distributed more than 60,000 pounds of fresh vegetables and fruits, along with pasture-raised eggs, chicken and turkeys. We distribute our produce at farmers’ markets and through food pantries, but our main focus is on our community supported agriculture (CSA) program.  CSA members sign up for a season’s worth of produce, and 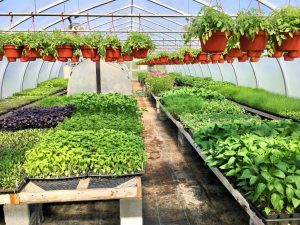 each week they order six to ten items from the selection of veggies and fruits we have to offer at that time. For our paying members, this is a chance to get local, organically grown vegetables through the season at a good price, and it gives them the confidence that comes from knowing where and how their food is grown. In addition to paying members, we also offer work shares and subsidized shares to folks in the community. Our work shares go to folks who are willing to put in a weekly work shift in exchange for their box of fresh veggies from the farm. Our subsidized shares go to families with children who may not have the funds for a share but could really use some nutritious food. 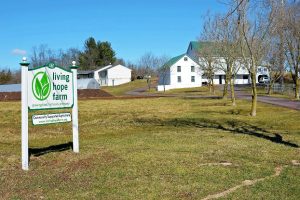 Good stewardship of the Earth is an essential part of my job as a farmer, and everyone’s work here at Living Hope. In order to hold ourselves to the highest standards, we take part in the Certified Naturally Grown program, which carries all the same requirements as USDA Certified Organic but with an additional emphasis on building a biologically diverse farm ecosystem. Like a natural environment, our farm relies on cycles that sustain one another. For example, after the vegetables are harvested, we bring in our poultry to forage on the plants and insects that remain in the field. The birds get food and exercise and help future crops by eating pests and fertilizing the soil. This kind of farming sometimes takes extra effort and coordination, but for me it brings the special satisfaction that comes with taking proper care of our place.

I also find it satisfying to be able to share our farm with others. We welcome many visitors to Living Hope, including school and church groups, corporate volunteer groups, volunteers with special needs, and individuals who 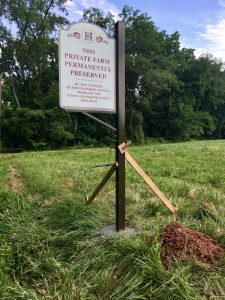 just want to lend a hand! Many of these folks say that they find their time on the farm healing and therapeutic, which helps to assure me that we are maintaining a healthy, positive place. We also share our work on the farm with the interns who commit themselves for a season (or sometimes more) to learn sustainable farming. A number of these folks have gone on to start farms of their own, and we hope all of them will continue our mission of growing healthy relationships with the land in one way or another. In addition, we look forward to connecting with a new community this summer as we begin bringing our produce to the Oxford Circle Farmers’ Market, an inner-city Philadelphia market hosted by the Oxford Circle Mennonite Church.

As we move forward, we continuously re-commit ourselves to our mission and seek to build on our strengths, including one of our most constructive and helpful initiatives to date: our sponsored CSA share program called “Farm to Family”. This program advances our social mission in many ways at once – it provides good food to families in need, but also gives them a chance to build a relationship with a local farm. Some of our sponsored share members have transitioned into being work shares, so that they could spend more time on the farm and give something back, but there are always more families in need. My hope as we grow into the future is that we can provide more families in need with produce and a personal connection to the land.

by Bob Keeler, bkeeler@montgomerynews.com, originally posted on June 11 by the News Herald, reposted by permission.

As Mike Hart went through the lumber from one of two local barns that are being dismantled, then reassembled as one, he noticed a piece was from an American Chestnut tree.

“That’s an extinct piece of wood there,” Hart, of Hartland Demolition & Restoration, said. “It wouldn’t surprise me there’s more.”

American Chestnut logs are only occasionally found in old buildings in Bucks County and seldom in Montgomery County, although that type of wood is more commonly found farther south, such as in Chester or Delaware counties in Pennsylvania or in the states of Delaware or Maryland, he said.

The barn on Minsi Trail in Hilltown and one on Forrest Road in Franconia were each built about 1850. Each is on township-owned open space land. The two will be combined into one that will be reconstructed at the Mennonite Heritage Center in Harleysville.

Known as the Nyce Barn Project, the Mennonite Heritage Center will use the barn to store historic farm equipment and items used in events such as the Whack & Roll croquet tournament and the Apple Butter Frolic.

Another purpose of the barn is to bring back memories of local barns.

While the second floor will be an authentic re-creation of the old barns, Hart said, the first floor will have a larger, more open space and a concrete floor.

“That will be used for classes,” Lapp said. The classes could include some, such as weaving, that are already offered at the center, or other suggested new ones, such as ones on canning food, he said.

The initial plan was to move only the Franconia barn to the Mennonite Heritage Center, but the Hilltown one will now make up the main part of the reconstructed barn, with the Franconia one being used to supply additional parts, Hart said. Floor boards from an early 1900s barn being dismantled in Limerick will also probably be used in the project, as well as some barn parts he’s accumulated from previous projects, he said.

“Because of the size of this one here, it lends itself a little bit better to the usages that we want to try to put it to,” Hart said recently during the dismantling of the Hilltown barn.

The barn would have been a typical one for the Bucks and Montgomery County area, he said.

Some interesting remaining features include the wooden hay trolley, wooden water tank and the original granary, he said.

The second-story granary was used to store grains such as oats, wheat or barley after it came from the nearby thrashing floor. It’s uncommon to see barns that still have the granary, Hart said.

“A lot of times, over the years, they were taken out just to make a little more room,” he said.

He also pointed out the tin plates covering parts of the granary wall.

“The rats loved to chew into the board to get into the grain, so almost always the granaries are patched up with tin can lids and license plates and different things like that,” Hart said. “This one’s no different.”

A corn crib on the property will also be moved to the Mennonite Heritage Center and reconstructed, he said.

All of the pieces of the dismantled barns are individually tagged to assist in putting the parts back together, he said.

Work at the Hilltown site is expected to continue throughout June, he said. The goal is to have the reconstructed barn completed by this year’s Apple Butter Frolic taking place Oct. 5 at the Mennonite Heritage Center.

Whitewash on the interior logs will be pressure washed off before the reconstruction.

“It [whitewashing] was mandatory in the 1930s if you operated a dairy farm out of your barn,” Hart said.

The “summer beam” or main girder of the barn is 16 inches wide and 55 feet long, he said.

“That is a real chunk of timber there,” Hart said. “That’s a big oak tree.”

The beam, which he estimated weighs more than 3,000 pounds, was probably cut from a nearby tree and dragged to the barn with the help of animals, he said.

“Imagine, they got it up by hand,” he said of the original builders.

To do that, it took a group of men, perhaps having piled up stone to assist with the job and lifting one end at a time into place, he said.

There are also about 20 40-foot-long beams and a secondary summer beam that used two pieces to span the 55 foot length of the barn.

“It’s gonna be a heavy duty load of lumber,” Hart said. The 55-foot beam is two feet longer than the longest tractor-trailer, he said.

Both the Franconia and Hilltown barns also have stone foundations made from local stone that will be reused in the combined barn.

One part that won’t be taken along with the Hilltown barn, though, is the about 2 feet of dried manure remaining in a portion of it. It’s unusual to see that because the farmers generally removed manure on a regular basis, Hart said, but apparently that was no longer being done when the barn was last used for farming.