By Anne M. Yoder, Coordinator, EDC/FMC Sistering Committee
On March 12, over 35 women met together for a Day Apart, held at Towamencin Mennonite Church. Attendees came from various Mennonite churches in Eastern District and Franconia Mennonite Conferences. A large group coming from Centro de Alabanza de Filadelfia, a South Philadelphia congregation that is made up primarily of immigrants from Mexico, Central America, and Latin America.

This gathering was a bilingual retreat that gave the o

pportunity to reflect on the theme “Sistering for Life.” The term “sistering” refers to a practice in carpentry in which structural repairs are made by attaching new wood beams to weak (sagging, cracked or twisted) joists to make the original stronger. All of us are strong at times and can help those who are weak; all of us find it difficult to make it on our own at times and need others to support us. Sistering is a gift that we embody as God’s women who are following Jesus throughout our lives.

The program’s theme was fleshed out in various ways. Songs were led in Spanish and English by a team from Centro de Alabanza and by Dorothy Beidler from Norristown New Life. A meditation was given by Ana Rosa Hernandez, a member at Centro de Alabanza, on Proverbs 17:17 (“A friend loves at all times, and a [sister] is born for a time of adversity.”) and Ecclesiastes 4:9-10 (“Two are better than one, because they have a good return for their labor; if either of them falls down, one can help the other up. But pity anyone who falls and has no one to help them up.”) Four women — Linda Esh, Dania Hernandez, and Ligia Canavan, from Centro de Alabanza, and Jenny Duskey of Ambler Mennonite – were designated to tell a story of being sistered. From them came accounts of loss, sexual abuse, stepping into unknown territory during a move, and finding faith in the midst of struggle, along with the spiritual, emotional and physical help they found along the way.

A children’s story, “Four Feet, Two Sandals”, was read to illustrate how something as simple as sharing a pair of sandals at a refugee camp can build sisterhood. Leticia Cortes, pastor at Centro de Alabanza, led us in activities that required teamwork and seeing how we felt in each other’s shoes. A sandal was given to each participant to decorate and to write a message on; these were then exchanged with another woman, with whom a prayer and blessing were shared.

Throughout the day we sat in table groups getting to know six or seven other women in a deeper way as we reflected together on our experiences of being sistered by Jesus and by girls/women at different stages of our lives. Women who could interpret between Spanish and English were each assigned to a table so that all of us could understand each other. 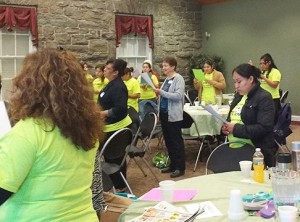 I felt great joy in spending time with the women who gathered on March 12th. Not knowing Spanish, I had the opportunity to experience what it’s like to be in the minority for once, but also to listen to a beautifully expressive language. Hearing the stories of women often moved me to tears and to laughter, and I marveled at the deep, and often exuberant faith that has emerged in spite of, or perhaps because of, difficult circumstances in their lives. Each year, this event challenges my faith journey and stretches my world-view. The Holy Spirit is alive and well and very evident as we meet. It is a privilege to take part in creating a holy space for this gathering to happen and to take part in it.

The Sistering Committee is working to hold annual gatherings like this and are planning for another one in 2017 Keep watch for announcements about it!

The Sistering Committee is especially grateful to Mike Clemmer and his team at Towamencin Mennonite Church for allowing us to use their facility and giving so much help in bringing our event to fruition. And I, Anne Yoder, want to thank the other members of the Sistering Committee for their wisdom and prayers and efforts: Marta Castillo, pastor at Norristown New Life, Leticia Cortes, pastor at Centro de Alabanza, and Doris Diener, of Franconia Mennonite Church.

The Sistering Committee represents Mennonite Women USA for eastern Pennsylvania (and the conferences’ outlying congregations) and looks forward to serving the women of our area. If you are interested in serving on the committee, please contact Anne Yoder at ayoder1@swarthmore.edu.

By Richard Showalter, reposted by permission from Mennonite World Review

In 1978 Luke and Dorothy Beidler moved to Kalimantan, Indonesia — where the Dayak people live along wide rivers in a great tropical forest — as pioneer missionaries with Eastern Mennonite Missions.

In a groundbreaking partnership between an Anabaptist mission agency in the global South and two from the West, the Mennonite Mission Board of Indonesia (PIPKA), EMM and Mennonite Central Committee united to send the Beidlers and others from Indonesia and the U.S.

Paul and Esther Bucher were appointed by MCC in 1979 from the U.S. From PIPKA came Pak Darmono in 1977, followed by John Reiner Paulus in 1978 and Gusti Ngurah Filemon in 1980.

EMM already had a long history of sending workers to places where the church did not yet exist, and PIPKA was fired with the same vision. Together they went to West Kalimantan, a region of Indonesia to which Islam had come 300 years before but where a high percentage of its people still followed their traditional religion. MCC contributed skills in community development as well as in verbal Christian testimony.

The Beidlers found in Kalimantan a people who knew of, but did not worship, God.

“God speaks to us through the birds,” the villagers said. “Some are evil, and others are good. When we hear the chirping of the evil birds, we do not go to our fields for three days, and we must sacrifice pigs. We fear the birds.”

The Beidlers learned the Dayak language and began to share the Good News. Traveling by boat and sometimes living on the water in a bandung (house boat), they began initiating fellowships of new believers.

“We heard that when Jesus was baptized, a bird from heaven descended on him, and this was a special sign to us who feared the birds that God himself had come to us,” said believers at Jelemuk, a neighboring congregation. “We no longer fear the birds.”

Now 35 years later there are 19 PIPKA congregations scattered along the region’s rivers.

A team from the International Missions Association, a group of Anabaptist mission bodies, visited the region in March. It consisted of Yesaya Abdi, chair of PIPKA and president of IMA; Dri Soesanto, regional director for PIPKA; Tilahun Beyene, coordinator of IMA, and Richard Sho­walter; IMA coach and president emeritus.

Since EMM and MCC disengaged from ministry in the region years ago, little has been reported in the West. However, the seed sown then and now by PIPKA is far from dormant.

“They spoke our Dayak language, and they spoke it well,” said Pastor Hendrikus Kipa of Melapi.

The Beidlers’ and Buchers’ willingness to live among the Dayak villagers in primitive conditions is long remembered.

“Go back home to the United States and say thank you to the people who sent Luke and Doro­thy,” said Petrus Kipa, a young pastor and the son of Hendrikus.

“My grandfather heard the gospel from pastor Luke and met Jesus,” he said, close to tears. “As a result, my father became our pastor at Melapi. And now I’m a grandson in the gospel because of that witness.”

Today many churches comprise half a village’s population. At worship gatherings, the benches are filled with children, fathers, mothers, grandpas and grandmas. Village chiefs are staunch members of the congregations.

In the village of Uchung Bayur, Pastor Yusak Sudarmanto led the people in preparing an elaborate ceremony of welcome to the team of visitors from Jakarta, Ethiopia and the U.S. Dancers led a procession to the meetinghouse, festooned with palms, lights and ribbons. Seventy-five children formed a great choir.

The congregation Sudarmanto leads dominates the spiritual life of the village, but this brings challenges as well as rewards.

“What do I do when two of the candidates for village chief are in my congregation and they want our support against other candidates?” he asked. “I believe it would harm the church to take sides politically, but threats come if I don’t.”

Abdi, Soesanto, Beyene and Showalter offered encouragement and prayer, noting that tough political questions can torture church leaders in Kalimantan forests as well as in Jakarta and Lancaster, Pa.

The visiting team did more than observe. They preached, sharing reports of growth and opposition in the global church, with a special focus on Ethiopia and the Middle East. The villagers turned out in force even at inconvenient hours.

After visiting the PIPKA congregations, the team made its way to the isolated mountainous region of Silat Hulu, where PIPKA had been invited for a conference of pastors and revival meetings among churches planted by Worldwide Evangelization for Christ missionaries.

Abdi used peanuts to illustrate financial giving. Beyene told stories of the Ethiopian underground church to people who had never heard of Ethiopia.

“The mission to Kalimantan is a model for partnership between agencies from different nations,” Abdi said. “Decades later, the fruit keeps growing.”