Last year Methacton Mennonite Church experienced their community knocking on their door, as they collectively grieved the loss of “The Methacton Oak” thought to be over 380 years old. Pastor Sandy Drescher-Lehman recounts this experience in New Energy Brings the Community to Celebrate and Remember, as the community came together, “remembering and celebrating the tree that belonged to all of us and to our ancestors.”

On that beautiful fall afternoon, more joy and peace was added to the world; from morning worship with hymns, a cappella and praise music, to an afternoon of Aztec drumming and dancing and a Bluegrass Band, God was praised in as many ways as they could invite the Spirit to be present!

Nicolas and Jonathan Morales from Souderton Mennonite Church created a drum from The Methacton Oak utilizing Aztec tools for part of the process. That drum and the boys were part of the indigenous dance group La Danza Azteca, who, with drum beats and dancing, blessed the land where a seedling from the old oak is growing .

Dave Benner from Methacton resurrected the Bluegrass group he’s sung with, including Merle and Floss Hunsberger and Sharon Hunsberger, and invited the Methacton worship team to join them for a grand finale.

Also honored in the day was Garrett Campbell from a local Eagle Scout troop, who re-set 130 of the toppled gravestones, and Wilson Roth, who has also done significant cemetery restoration of the old graveyard.

It is truly a gift to be able to celebrate the many talents and gifts of our neighbors in and outside the walls of our meetinghouse. God continues to use The Methacton Oak even in its death. 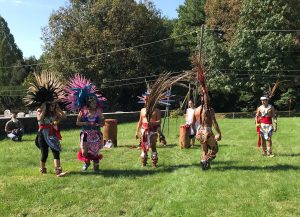 When Dave Benner was 13 years old, handing out bulletins in his home church of Finland Mennonite, Harold Fly stopped and said to him, “David! Oh, to be a doorkeeper in the house of the Lord.” This passing comment stuck with him. Welcoming people is important, he thought.

Dave continued to learn hospitality as a gift the church gives in a culture where too few have experiences of welcome they can count on. As a musician who plays banjo, guitar, bass guitar, and mandolin, Dave was creating welcome with church music and worship teams from a young age.

His musical gifts were recognized early on by Leroy Wismer, who brought him to Bowery Mission in Manhattan’s Lower East Side to play guitar in a Sunday night worship service for two hundred homeless men. Though only about 16, Dave was expected to go up front with the men to be available for counsel at the end of the service. “I was scared stiff,” he says, “but my understanding has always been to [offer care] not for results but to plant a seed.”

In the mid-sixties, Dave’s draft board approved an alternative to military service through a Mennonite Voluntary Service unit in New Haven, Connecticut. During this time he met Priscilla, a singer in a women’s quintet performing at a local prison where he also was singing. Thought she wasn’t Mennonite, Dave’s V.S. leader encouraged him to explore the relationship. They married five years later.

In 1970, when Dave was called to serve as Finland’s first full-time pastor, he asked to be permitted to go to school. They agreed he would, and a member of another congregation was willing to pay for his first year at Northeast Bible Institute. Over the years, he acquired explicit and instinctive ministry skills, including learning to notice “the eye drift of a group:” where people looked during a meeting, who they were trusting to lead them.

David needed such skills when, in 1990, he responded to Franconia Conference’s goal to plant 50 churches in 10 years. With six other couples, he and Priscilla and Rich and Fern Moyer started a new community of faith. Shalom Christian Fellowship grew and flourished. With Rich, Dave served as a co-pastor from the beginning, and continued to offer his many musical gifts in worship.  Later, Duane Hershberger joined Rich as co-pastor. Shalom became a place where people could belong—where people who had experienced rejection elsewhere received the space and love to become part of a community.

In 2005, after several families had moved away, Shalom took a 6-month hiatus. Dave and Priscilla visited all around and found nothing quite like their eclectic, beloved congregation. They missed it, and Duane did too. They re-opened as Peace Mennonite Church in May of 2006, trying on some new understandings of leadership until they closed on Easter 2011.

Peace built connections in the wider community through the Clothes Line, a clothing giveaway that is still serving folks in town under Fern Moyer’s leadership. Peace also nurtured ecumenical friendships, joining with four other congregations across denominational lines for a community Lenten series, with each congregation hosting a service and every minister participating in leadership.

David continues to play music far and wide—making open space for relationships to grow. Like many before him and many to come, he’s given time and love and labor, planting and watering, and standing back. This pastor’s path of ministry has been winding and joyful, difficult, disappointing, faithful, worth wondering at—the familiar sounds of God’s creative work.