For the last month, Philadelphia Praise Center pastor Aldo Siahaan has been reminding his congregation of their rights during each Sunday morning worship service.

In expectation of, and response to, a recent wave of Immigration and Customs Enforcement (ICE) raids, immigrants in Philadelphia and other US cities—both documented and not—are living in fear.  “I’ve been like them,” reflects Siahaan, who migrated to the United States in 1998 after riots in Indonesia: “I know what they feel like, living like this.”

Questions and concern around immigration have become increasingly important for members of Franconia Conference, which has seen a increase in immigrant congregations over the past decade.  Currently, close to fifteen percent of the conference are first-generation immigrants, many coming from Indonesia, Mexico, Tanzania, Myanmar, Hong Kong, and India.

Some of Franconia’s Latin brothers and sisters originally entered the US by way of the southern border.  Recent news reports have highlighted tragic conditions in detention camps there, where some families are separated, and others are turned away before they can even apply for asylum.  Many Franconia congregations have been asking what they can do to help.

“Having been to the border several years ago to see key Mennonite partners there, I recognize that there are some basic practical needs that people require after they’ve been released from detention,” reflects Franconia’s executive minister Steve Kriss.  Mennonite Central Committee (MCC) is meeting some of these needs by making and distributing Immigrant Detainee Care Kits.  “The kit response feels hands-on and important as the kind of thing Mennonites do to directly respond to human needs,” observes Kriss.

In order to provide additional kits, Franconia’s board has allocated a $5000 grant to match contributions from Franconia and Eastern District congregations to the MCC East Coast’s Material Resource Center (MRC) in Harleysville, PA.   The MRC will make the care kits to send for distribution in Texas and New Mexico through MCC Central States.  The grant will also match gifts given by Franconia congregations to MCC West Coast for transporting kits distributed in California and Arizona.  The deadline for matching is August 31.

Even as Franconia and Eastern District congregations raise financial support around the border crisis, we remember that the struggle continues closer to home. “We ARE immigrant communities,” Kriss acknowledges.  “We are communities that are responding on a regular basis to the challenges of receiving people who are seeking safety and asylum in places across the country.”  Many pastors in our congregations are regularly responding to crises of migration, he observes.  In these cases, these are not programs of the church; they are pastoral responses to real needs in our communities.

When a large migrant caravan began making its way through Mexico in 2018, the Conferencia de Iglesias Evangélicas Anabautistas Menonitas de México (CIEAMM), a Franconia Partner in Ministry, decided to open their arms and hearts to the “temporary refugees” in Mexico by providing aid.  “We take seriously the teaching of Jesus, who invites us to the [kind of] love and solidarity that feeds the hungry, dresses the naked, gives water to the thirsty, protects the helpless, takes care of the sick, and visits the incarcerated,” described moderator Carlos Martínez García at Mennonite World Conference’s Renewal 2019 event in Costa Rica.  “We did a work of compassion, putting ourselves in the place of needy migrants, and acting to bring some accompaniment and comfort.” (Read his full remarks.)

Fernando Loyola and Letty Cortes pastor Centro de Alabanza de Filadelfia, a congregation of Latinx immigrants, and have seen a recent wave of immigrants from Guatemala arriving in their neighborhood.  Their congregation provides food, clothing, funds, and help navigating the new American culture.  They refer families to immigration lawyers and to Juntos, a community-led immigrant non-profit that fights for human rights in South Philly.

Philadelphia Praise Center has been renovating its building to become a sanctuary church, where immigrants fearing deportation can live safely during ICE raids.  Siahaan has walked with many individuals and families who need help navigating the complex legal channels involved in applying for visas or green cards.  Just this last week, he was called to help someone from the community who was picked up in an ICE raid.

Unfortunately, once someone has been detained by ICE, there isn’t much that can be done, he explains—within a couple of weeks, they’ll be deported.  The need is greater before that happens; what immigrants need most, he suggests, is for their Franconia brothers and sisters to be their voice: “Call or write to your congressperson and say, ‘Hey, you need to do something about this situation, these immigration raids!’”

Advocacy work includes contacting representatives on both state and national levels.  Steve Wilburn, teaching pastor at Covenant Community congregation in Lansdale, PA, has been involved with International Justice Mission (IJM) since he traveled to Cambodia and Vietnam in seminary and saw IJM’s work in battling human trafficking.  Currently, he’s partnering with IJM to advocate for the “Central American Women and Children Protection Act of 2019,” which is legislation that commits US funds, in partnership with the governments of Guatemala, Honduras, and El Salvador, to help them restore their justice systems in order to protect women and children from abuse.  Several Franconia Conference leaders have signed a letter in support of this legislation.

Most US government efforts in those countries have been focused on drugs and gang violence, Wilburn explains, but that doesn’t help protect children and women: “Those are some of the reasons that people are leaving and trying to escape violence there, becoming refugees,” he says.  Most would rather stay home if home were a safe place for them and their children.

Siahaan recently went on an MCC borderlands tour to meet migrants and see the situation for himself.  On his trip, he met a young mother with two children who were waiting to apply for asylum.  They had fled Colombia after her husband had been shot by a gang.

It was eye-opening for Siahaan.  He had read books and heard stories but meeting real people on the border face-to-face affirmed for him that the work the South Philly congregations were doing mattered.  It encouraged him to keep going.

Beny Krisbianto, pastor of Nations Worship Center in Philadelphia, is a member of the conference executive board.  The decision to allocate the funds for the matching grant was easy for him when he considered the children who are daily affected by both the “border crisis” and the local ICE raids.  It’s not a political issue, he emphasizes, but a call to care for real children who had no control over the decision to come in the first place.  “These are real people, who are already here, who are suffering and may die,” he says.  “These kits will help.”

His congregation supports conference advocacy for migrants at the southern border because they, too, are daily experiencing the fear and uncertainty of the country’s broken immigration system.  It’s not just a story you see on CNN or ABC News, he reminds the conference community; for immigrants in South Philadelphia, “It’s our everyday life.” 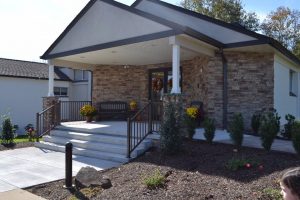 In 1984, a core group formed from the Franconia congregation to begin planning for a new church plant in the Lansdale/Montgomeryville area.  In December 1986, the doors of Covenant Community Fellowship were opened for their first worship service at North Penn Senior Center on Main Street in Lansdale.  Three years later, with the assistance of other Franconia Conference churches, and under the leadership of Pastor Earl Anders, Covenant acquired the Beth-Israel Synagogue building just outside of Lansdale.  The congregation still meets there today, led by Pastor Jay Moyer.

Like most churches, we seek to worship God well, care for our neighbors, and reach out to our community.  Our services are informal and include a mix of contemporary worship and traditional hymns, as well as practical teaching based on God’s Word.  We regularly pray for and minister to the needs of our congregation and our neighbors.  And we find ways to engage with our community through events like our free Spaghetti Dinner, which we host twice a year.

Recently, though, we’ve begun leaning into one of the areas in which God has blessed our congregation: our age diversity.

We are a multigenerational congregation with people of all ages worshiping and fellowshipping together each week.  We have a number of young families and have recently had the joy of welcoming several new babies into our church community.  We also have older couples and individuals who have been attending Covenant for many years.

In the past year, we have become more intentional about not just being multigenerational in our attendance, but also in our engagement with one another.  Older and younger church members regularly meet to learn and grow from each other.  Our regular women’s and men’s gatherings are designed to be open to people in all different stages of life so we can learn and grow together.

We recently started a mentoring program to pair up our youth with adults in the congregation that can help guide them in faith and discipleship.

This past spring, we hosted monthly family nights where we invited several of the more mature members of our congregation to share their wisdom on practical life topics including finances, parenting, and marriage. This sharing led to wonderful times of discussions between age groups that were fun, encouraging, and challenging for everyone that attended.

The support and care across generations has proven especially important as we’ve had congregation members face health issues, financial hardship, and loss over the past year.  In each circumstance, God has not only shown his grace and provision, but he has brought a deeper unity and interdependence to our congregation as we have had older and younger members cross generational barriers to minister to and support one another.

More and more we are discovering how God has created Covenant to be a place of worship for people in all stages of life. We like to tell people that we at Covenant are not a bunch of perfect people, we are broken people that worship a perfect God.  Our desire is to share the love and truth of that perfect God to everyone we can, from every generation.