An Advent monologue written for use in worship at Methacton Mennonite Church by Marty Kolb-Wykoff.  Members of the congregation have been taking turns sharing their “God-moments” during Sunday worship.  This monologue imagines a special moment many years ago when one woman encountered God in a truly remarkable way.

My God-moment happened a very long time ago.  And while you may not be very familiar with me, you certainly know of my daughter, who figures prominently in my story.  My daughter’s name was Mary, the Mary who gave birth to Jesus.  Yes, that Mary. 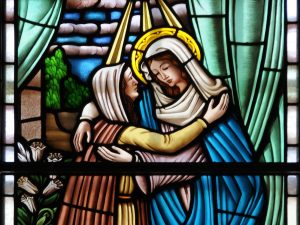 It happened when Mary was just a young girl.  Mary was not like lots of other girls; yes, she had friends and she enjoyed playing with them when she wasn’t helping me.  But she also liked to be by herself.  She loved to watch the birds and was good at recognizing them by their songs.  She was also fascinated by flowers, especially wild flowers.  She would go for walks and come home with beautiful bouquets of wild flowers.

It was one afternoon after she had been gone for awhile on one of her walks that she came back pensive and thoughtful.  She said very little during the evening meal.  I could tell she was thinking about something.

After the meal was cleaned up, she asked if I could go outside by her favorite tree; she wanted to tell me what happened that afternoon.

We sat down and the first thing she said was that she had seen and talked with an angel.   I wanted to laugh, but I didn’t, for I could tell this was all very serious to her.  So, I said nothing.

She went on to tell me how she was sitting under a tree, watching a bird build a nest, when she heard a voice say, “You are highly favored; the Lord is with you.”

Mary told me how startled, troubled, and even fearful she felt by this sudden intrusion into her afternoon.  But he assured her that he was an angel from God and she had nothing to fear.

But that was just the beginning; he told her that she would have a baby who would be called the Son of God.  It was to happen through the power of the Holy Spirit.

The story is still not over.  The angel gave Mary a sign; he told her that our relative Elizabeth, an old lady who lives in Judea with her husband Zechariah, is six months pregnant.  He ended the conversation by assuring Mary that with God nothing is impossible.

I had no idea how to respond.  What was one to make of this?  We are just simple folks from Nazareth.  Finally, I said, “Let’s go to bed and we can talk tomorrow.”

In the middle of the night I awoke with a start.  I realized I, too, had just had an angel visitation.  He said to me as clearly as I am talking to you:  With God nothing is impossible.

At that moment I knew in the depths of my being that Mary’s imagination had not gotten the best of her.  What I didn’t know was how our lives were about to be forever changed.