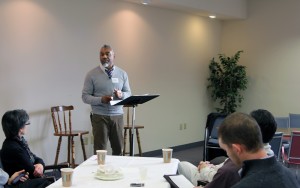 Ewuare challenged congregational leaders to understand the concept of “race:” a social construct emerging out of colonialism and slavery.  Once congregations understand race, they can begin to have a conversation about racism and the impact racism has had on all people.

Ewuare also encouraged pastors to study the way that race has impacted the development of the Mennonite church in the United States and the communities that Mennonite immigration displaced.  Mennonites have their own history of suffering but somewhere along the way, they became the “Quiet in the Land.”  When they came to the “New World,” the Quiet in the Land were silent in the face of injustice and benefited from it.  “This is also a part of your history,” he said.

Hear Ewuare’s entire presentation, his suggestions on steps congregations can take to invest in racial justice, and an insightful question and answer time:

Ewuare suggests that white pastors and congregations read A Testament of Hope as a way to begin understanding African American thought and theology.