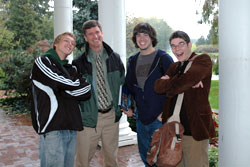 For as long as I can remember, Mr. Wiens would take students out to breakfast just to talk things over. I used to make fun of people that would actually agree to go out with him, thinking that it was kind of odd how the Vice Principal was hanging out with students. One day, Mr. Wiens popped me the big question. â€œDo you want to go to breakfast tomorrow?â€ Not wanting to get on his bad side, I agreed. The decision to go with Mr. Wiens to breakfast was possibly the greatest choice I have made so far in my high school career.

Besides my parents, Mr. Wiens developed into the adult in my life that I could come to and share my problems, questions, or joys that I wanted to share. Coming from Souderton Area High School, I was not used to this kind of attention from a teacher. I tended to be think that you were sent to the vice principal because you were in trouble. Not so with Mr. Wiens.

Mr. Wiens is more than just an authority figureâ€”he tries to be your friend, and Iâ€™m glad to say that he is my friend. I know that if I do something wrong, I will not get special treatment, but get punished the same as anyone else. And this punishment may be even worse because I will have to live with knowing that I let down someone important to me.

One memory with Mr. Wiens that I will never forget is our Mennonite Secondary Education Council (MSEC) touring choir trip. Mr. Wiens and I are hardcore CD touring choir groupies and the choir had their MSEC concert in Lancaster, PA. Mr. Wiens and I saddled up and made the trip west. Although I donâ€™t really remember what we talked about during those car rides, I do remember that I gained a lot from them and also gained a lot of respect for Mr. Wiens as a person and a friend.

There are many examples of how Mr. Wiens cares for Christopher Dock and its activities. He is always seen at boyâ€™s soccer games, field hockey games, baseball games, band/orchestra concerts, and touring choir concerts. He is a guy who loves his school and loves his students.

Mr. Wiens is a person that I can look up to. He mentors me whether he wants to or not. When I look around and see his relationships with people, I know how I want my relationships to be. He is a guy that I respect in his actions with the school and with his peers. He is an authority figure to me, but he is also a friend. Heâ€™s a pretty good guy to get sushi with as well.

In partnership with the family and the church, developing the God-given abilities of students in preparation
for responsible stewardship of life as members of Godâ€™s people in a global society.