What if your family had to move to a new town? What would you need in this new area? You’d need a place to live, jobs, a new bank, a new doctor, and new schools for your children. You’d also need a way to get around and a map or kind neighbor to show you where things are. What if you were moving to a foreign country because of fear for the safety of your family, with little more than a suitcase full of some clothing and priceless family memories? What more would you need then? Not only a house, but also furniture and other necessary housewares. Not only schools for your children, but also language classes for yourself. Not only jobs and a new doctor, but also caring people who can help you walk through the fear of settling your family into a new country.

These are the questions being answered and the needs being met by Blooming Glen Mennonite Church, Plains Mennonite Church, and Souderton Mennonite Church. These congregations are assisting three families recently resettled in the Philadelphia area by Lutheran Children and Family Service’s Refugee Resettlement program.

“Working with these families has certainly been a positive learning experience for all involved,” says Patsy. “It has brought us even closer as a church working together to help this family rebuild their lives here in America.

It has also been a joy watching them blossom in their newfound freedom. The Turkish families are still in touch with many of our church members. The sad part for us this time is seeing the family from Burma leave us for Colorado where they are joining family before we have really had time to establish a long term friendship. We will miss this wonderful family and wish them God’s blessings on their new journey in America.”

Patsy also noted that providing support to a very strict Muslim family has been a struggle; one challenge Blooming Glen faced in resettling that family was finding a job for the father where there was no pork in the building. However, she also expressed Blooming Glen’s joy in being able to share Christ’s love to those of other faiths.

“I think that any time we open ourselves up to sharing and learning about each other’s faith, we build bridges of friendship and peace. It certainly has broadened our worldview, learning about the families’ cultures and experiences of living in a refugee camp or as an outcast people like the Meskhetian Turks.”

Plains
Plains has also participated in resettling refugee families over the years, including a Sudanese family in 2000, and currently is supporting an Iraqi family originally from Baghdad. 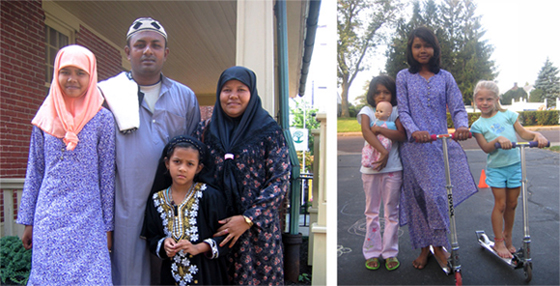 Steve Landis coordinates the resettlement efforts at Plains and notes that when the idea of helping to resettle a refugee family was proposed to the congregation, people were immediately interested in participating and supporting the family.

“Our friendship with this family and the support we’ve been able to provide feels like a contribution of peace into a situation where violence and hatred continue to destroy or impact many lives,” reflects Steve. “It’s been a lot of work to set up a household for a family of six and help them work through the many challenges that face strangers to our culture and language. However, it has also been very rewarding to be a part of a group that is committed to sharing God’s love with our neighbors and to feel the emotional connections between our Iraqi friends and the church family. ”

Souderton
When Souderton was asked to help an Iraqi family settle into the area, Pastor Gerry Clemmer asked Dorothy Engstrom to coordinate their efforts. That next Sunday, while sharing about the project and asking for volunteers, Dorothy told her congregation that she agreed to serve as coordinator for several reasons: the history of the Mennonite Church and in particular the congregation’s commitment to peace rather than war; the congregation’s continual prayer for peace in worship services and in private prayers since the beginning of the war; and the fact that “even though one congregation can’t stop the suffering and death of the war, it could help one family and thus live out its commitment to peace.”

In fact, Dorothy was attracted to the Mennonite church partly because of “its vision to bring social justice and peace to those who are in need and suffering.”

Souderton has reached out in this ministry of resettlement for several years and has also helped families from Cambodia, Cuba, and Africa. The congregation is “convinced that participating in this ministry is at the heart of what we understand it means to be followers of Jesus and to live by Sermon on the Mount values,” says Dorothy. “Reaching out to ‘strangers’ and those in need of our help is a witness to our commitment to Jesus as well as being the Church beyond what is familiar and comfortable to us. When we are made aware of needs, how can we not respond? It reflects who we are as God’s people.”

Dorothy has been blessed by the enthusiastic response her congregation has shown in volunteering to take care of the needs of their refugee family. It has also provided “an avenue for persons to work together on various teams who may not have known each other,” due to the size of the congregation and two worship services.

“We are also learning a lot about the resiliency of the human spirit as we get to know our family. They have drawn out of us feelings of love, compassion, and caring. With that resiliency comes the reality that our Iraqi family has extended family still living as refugees in Jordan as well as family still in Iraq. Our joy in relating to the family is tempered by the reality that there are an estimated 2.3 million refugees from this war with only about 170,000 approved for resettlement in all the countries of the world.”

“Globally, even though we are helping just one family of six persons, it is one way of lending our voice against the pain and suffering brought about by the war,” says Dorothy. “In some small way, it is a redemptive act in the face of mass suffering, destruction, horror, and trauma.”

photos provided by the congregations featured