“Inter” words are familiar to most of us – interact, interdependent, intermission, intertwine, international, intercede, intercultural, etc.  Based on the Latin, “inter” means “between,” “in the midst of,” “mutually,” “reciprocally,” “together”.  Interspace is an adventure of new learnings, a place of possibility, sharing, rest, and reconciliation, but it is also a space that is unnerving, humbling, uncomfortable, and challenging. 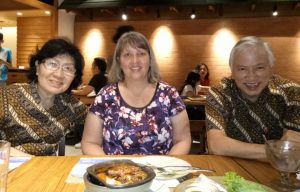 Since the end of 2017, when I resigned from a pastoral role at Nueva Vida Norristown New Life, I have been living in the space between church homes and between work roles. It was strange and exciting to know that in this in between space, I could visit other churches and experience worship and Word in new ways. However, there was no church home because I was “in between”. The ministry that I was involved in was my responsibility no longer and it was freeing to dream and envision what shape my role will take as Leadership Minister of Intercultural Formation with Franconia Conference, but hard to leave behind the relationships that I had nurtured for years. In the first two months of 2018, I was in interspace, in between, waiting for my new role to begin. Then in the beginning of March, I began my international adventure with a trip to Indonesia with the purpose of studying Indonesian, a language that I had once learned and spoken as a child, to enhance my future intercultural ministry within the conference. 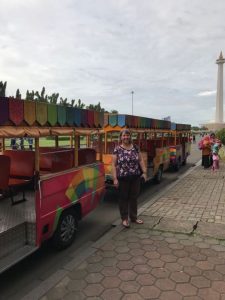 What an experience! The food, the culture, the language, and the people brought my childhood in Indonesia flooding back. I kept moving between being so comfortable and so uncomfortable, so quickly it was disorienting. I was delighted to experience familiar tastes, words, and culture while feeling so humbled as a person who was learning a language and speaking it so poorly and who didn’t know the cultural expectations, so I embarrassed myself. This interspace of being in a different country required courage, creativity, willingness to fail, and engagement with people who were different. It was the perfect connecting space between my past experiences and my future hopes and ministry.

A young friend of mine shared with me recently of her journey towards learning to stay in the interspace, the space between, like the Saturday between Good Friday and Resurrection Sunday, holding onto the sacrifice of Jesus on the cross while celebrating the power of the resurrection.  It takes courage to stand “between”.  Isn’t that exactly what Jesus has done through his life, death, and resurrection?  Even now, Jesus “intercedes” comes and goes between God and us, to keep that interspace holy and righteous.  Romans 8:34, “Who then is the one who condemns? No one. Christ Jesus who died—more than that, who was raised to life—is at the right hand of God and is also interceding for us.”

Furthermore, we are invited to share the same interspace of intercession, interrelationship, and interconnectedness for deeper relationship with others.  1 Timothy 2:1-3, “I urge, then, first of all, that petitions, prayers, intercession and thanksgiving be made for all people—for kings and all those in authority, that we may live peaceful and quiet lives in all godliness and holiness.” 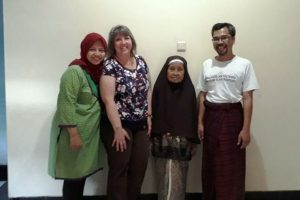 In our conference, we have a shared priority to be intercultural, meaning that we seek to connect, stand, and live in the space between the cultures represented in our conference and the world.  This is different than being multicultural which advocates for equal respect and promoting cultural diversity.  When “multi” is not enough, we seek “inter”. With multicultural, we still have a sense of “us and them”.  With intercultural, a between space is created where “we” belong. Our conference priority is for networking and cultivating intercultural ministry relationships. This process is described as “including an assessment of current and emerging relationships that work cross-culturally while building further capacity toward mutually-beneficial relationships among ministries and congregations. Increasingly, these relationships will be defined by reciprocity and transformation rather than paternalism and patronization.  Relationships will be built around both work and celebration, both doing and being together.” Read this and other priorities here; read more about some of Franconia Conference’s intercultural and multicultural work here.