While blue skies and sunny weather greeted them, they were quickly in contact with the Long-Term Recovery Committee of Bastrop east of Austin, who introduced them to several of the city government officials from Rockport, one of the hardest hit towns along the coast.

The City of Rockport moved their city service officials to the Community Library of Bastrop because it was simply unsafe, they said, to remain in the Rockport city limits.

“There are gas leaks everywhere”, Kevin King said of the information he received in conversations with city officials. “The city hall in Rockport was wiped out so Bastrop adopted them in make-shift offices in the community library.”

Mennonite Disaster Service volunteers have been serving in Bastrop since 2011 responding to floods, fires, tornados and more floods.  They most recently completed work there in March 2017. Fortunately, Bastrop was spared the worst of Hurricane Harvey. 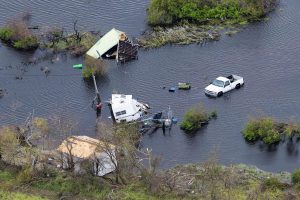 The team also spoke with Marty Troyer of the Houston Mennonite Church.  Troyer told King of the flood that “there has not been one square mile that has been spared in Houston.”

By mid-afternoon, the team was on their way to La Grange, then Victoria, two cities in the path of the storm. Thursday they planned to visit the town of Pasadena southeast of Houston where Iglesia Menonita Casa del Alfarero experienced flooding with some members losing their homes.

The investigation will continue through Sunday, September 3.

Visit Houston Mennonite Church for more information on how to be a social media ambassador and additional ways to assist in Hurricane Harvey relief.