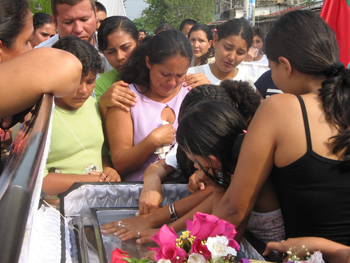 At 3 a.m. on June 14, 2007 several assailants broke through a skylight and into the Bogota Mennonite Church office of Justapaz: the Christian Center for Justice, Peace, and Nonviolent Action. Upon entering, they disabled the security and surveillance system and proceeded to steal two of Justapazâ€™s thirteen computers. The computers stolen were the two containing the most sensitive information including documented cases of political violence and churches active in courageous social justice work. They also held information on Justapaz staff, including Janna Hunter Bowman (Documentation and Advocacy Coordinator of Justapaz) and individuals connected with their documentation project entitled, â€œA Prophetic Call: Colombian Protestant Churches Document Their Suffering and Their Hope.â€ Later that day, after making phone calls to colleagues in both the United States and Colombia in order to coordinate emergency response between Bogota and Washington, D.C., a troubled yet remarkably calm Janna Hunter Bowman sat down with me to talk about her work and her life in Colombia.

Janna immediately explained that this robbery was just one in a series of politically motivated break-ins of human rights organizations that will not likely be fully investigated. It is not in the best interest of Colombiaâ€™s government to do so. With tears in her eyes, Janna noted the increased danger that people connected to Justapaz now face, as well as the reaffirmation of Justapazâ€™s conviction to follow Christâ€™s example of non-violence, calling for repentance, and seeking a just peace through contributing to conflict transformation in Colombia.

Justapaz is a 17-year-old peace ministry of the Mennonite Church of Colombia that â€œcontributes to a culture of respect for human dignity and peacebuildingâ€ in Colombia. Justapaz has eight full-time staff who work with a wide range of conflict transformation initiatives at local, regional, national, and international levels. These initiatives include conscientious objection, conflict mediation, peace training and education, the development of a network of peace churches, and a documentation project and national and international advocacy.

Janna describes herself as a daughter of Bally (PA) and an Anabaptist Mennonite by both tradition and choice. When she first learned of the struggles in Colombia, she had been struggling with a sense of sadness around the churchâ€™s shortcomings in following Christâ€™s call to right relationships and peace. In 2000, the Mennonite Church of Colombia wrote a letter to Mennonite Church USA asking to join them in prayer and action to stop a bill proposed in Congress that they predicted would further complicate the already troubled situation in Colombia. Janna read this letter and felt a desire to learn more about Colombia and the Colombian Mennonite Church because she saw in them a â€œradical obedience to Christ.â€

The bill, titled â€œPlan Colombia,â€ was passed later that year. While the bill was officially intended to help Colombia put an end to the narcotics market and stop the internal war, it gave over 80% of the total $3.3 billion proposed in aid to military forces. As a result, the conflict between guerrilla entities and the government, its army, and paramilitaries, has been heightened. As civilians are caught in the middle of the conflict and victimized by all sides, churches are among those targeted. As churches help those around them, they are often perceived as challenging those in power. For example, if a church is giving aid to a victim, they may be seen as challenging the perpetrator. â€œAs we amplify voices of the victims, we are targeted,â€ explains Janna, referring to the attack on the Justapaz office.

In 2001 Janna left the United States to go to Colombia. She humorously recalled that she really did not understand anything about Colombia or even speak the language very well, but felt an â€œundeniable sense of needing to be there.â€ Her first tasks in Columbia included starting a sister church program and working on international education, including sending action alerts and creating delegations. Janna returned to the United States in 2004.

Approximately 80% of the political violence in Colombia occurs in rural areas. There are many small churches scattered throughout these areas. When infractions began to occur, many of these churches sought aid from their national denominational offices, but many of these offices chose to do nothing. In an act of resiliency, they sought help elsewhere and began talking with the Mennonite Church of Colombia. In 2003, Justapaz partnered with the peace branch of the Evangelical Council of Colombia Churches â€“ the Commission for Restoration Life and Peace â€“ to report on the violence related to armed conflict as it affects churches. They joined together again in 2006 to further document the violence and update their report through a joint program, and it was at this time that Janna returned to Columbia. She described her work with the Columbian people as a â€œpowerful and energizing experience [that] keeps taking me back.â€

The joint Justapaz and Evangelical Council of Churches documentation project is largely run by 30-35 volunteers across five regions in Colombia. Each region has a volunteer coordinator and a team of trained volunteers who document their own communities. These volunteers are pastors, teachers, housewives, lawyers, banana vendors, and other everyday people who risk their safety to record the human rights infractions in their country. Justapazâ€™s documentation volunteer training program includes a look at the biblical models for recording life stories, the scriptureâ€™s perspective on the value of human life, and Christian responses to the suffering of Godâ€™s children in times of war. The program also addresses issues of fear, what it takes to do proper documentation, and what permissions are necessary in order to record and then tell someoneâ€™s story. 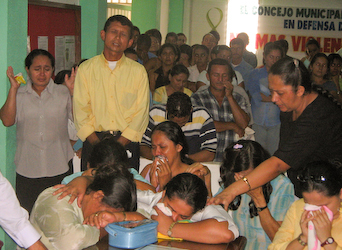 Janna explained that the program she coordinates not only documents and denounces violence, but also announces hope through reporting on social restoration and peacebuilding initiatives carried out by local churches amidst the violence. â€œIt is incredibly humbling and a sacred privilege to be able to accompany these faithful servants as they live out sacrificial obedience joyfully, even when it means risking their own lives,â€ she said.

Janna loves the people of Colombia and feels a deep kinship with them. She values the friendships she has developed with people she profoundly respects and highlighted her appreciation for the opportunities she has every day to learn from the â€œprophets, saints, and everyday heroes that war creates.â€

As we wrapped up our interview, Janna talked about her hopes for support from the congregations of Franconia Conference. She suggested that a simple way to support our Colombian brothers and sisters would be to read, â€œA Prophetic Call: Colombian Protestant Churches Document Their Suffering and Their Hope (available at mcc.org),â€ and pray for the victims, perpetrators, and peacemakers. â€œI invite churches to listen to their stories and consider the Colombian faithfulness as a part of their own, intertwined through faith and policies.â€ Janna also extended an invitation for people to visit her and her husband Jess, who is a Regional Director for Witness for Peace, in Colombia.

Janna returned for a third time to Colombia on June 15, 2007 after a two week break she had taken in order to take a course at Eastern Mennonite Universityâ€™s Summer Peace-building Institute and visit with family in Southeastern Pennsylvania. Janna plans to finish her term in Colombia through Mennonite Central Committee in 2009. Upon her return, Janna hopes to attend seminary and focus on peace studies.