Many of our churches have just finished their celebration of Epiphany – a day that seems to have taken a back seat to our more culturally-relevant Christmas and New Year’s celebrations. Epiphany is literally defined as a “Christian festival held on January 6 in honor of the coming of the three kings to the infant Jesus Christ.” Yet, as I reflected on the story of how the Magi saw something new in the sky and were compelled to leave behind all of their responsibilities and travel to see this new king, I couldn’t help but wonder if epiphanies have the same effect on people today. Is it even possible that we, who live in our practical or intellectual worlds of thought, would even be open to see or understand something in a new way through God’s divine enlightening? 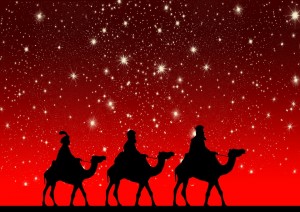 Perhaps we spend so much time trying to figure out what God is doing and saying through our epiphanies that we miss the real purpose of them – to draw us to worship. The sight of the star set the Magi into motion. They saw the star and they freed themselves to make the trip to worship the newborn savior king. Maybe we all need some sort of epiphany to point us to the place or posture of worship.

Over the Christmas holiday, my nearly 3-year-old grandson helped enlighten me about my own need to make worship a priority. One night before he fell asleep, he was lying in bed when he burst out in singing “Gloria, Gloria, Gloria,” the refrain of the Christmas song he heard earlier in the week. And then there was silence. A few moments later, he repeated his praises to God –this time adding “In excelsis Deo.” He had heard this chorus for the first time of his life earlier in the week, and now, he couldn’t help but continue to sing it as a way of praising God. It burst forth from his heart and broke the silence. The song was a part of him – and he sang God’s praises freely and joyfully over and over again.   In that moment as I stood in the hallway outside of his room, the light became clear to me.  It was an epiphany. My heart was filled with joy as I whispered – Gloria in excelsis deo, indeed!! Every day that we live should be guided by the Epiphany that opens our eyes to new understandings of the fact that a Savior has been born. And that leads us to worship. Come all, come everyone and worship!

Michael Clemmer is pastor at Towamencin Mennonite Church and a LEADership minister in Franconia Conference.