By Adriana Celis – originally published in Spanish by The Mennonite (LINK) 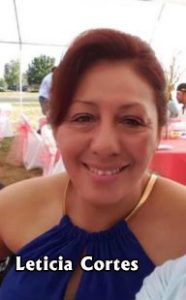 “Yippee, yippee… We go on the train, we go on the train, to the heavenly homeland… Come inside little children, it is a very special train… It is the gospel train… Come on kids, we invite you to get on our train…” – Children´s song by Miguel Bonilla that marked the life of Pastor Leticia Cortes. (Leticia is originally from the Federal District, Mexico.)

From a young age, Leticia had to endure moments of many difficulties, of many challenges at family and economic levels. Those were hard times, very difficult in her household, because of the constant abuse of domestic violence. Her father had an erroneous concept of what it meant to be a man and a father of a family; he would subject her mother and siblings to constant beatings – they were victims of domestic violence.

Time followed its course and as the days became months and the months years, she became a pretty young girl with many dreams and desires to fulfill – even if these dreams looked a little distant. She was victim of sexual abuse at 14 years of age, and everything seemed to vanish: her life, her goals, and her ideals. She considered herself a young flower that was beginning to live – it was quite difficult to endure this tough situation. She asked herself:  Does God have a purpose? Could God intervene?

Everything already seemed lost by the time she was 18 years old. Being a mother of three little children and having no one, she could not see a different path than the one marked by sadness, loneliness and romantic breakups. One night, she attended a Pentecostal church where they shared the love of a Savior who had the power to forgive, clean and restore her – the Savior called Jesus, the Son of God.

Days after her personal encounter with Jesus Christ, near to her house, a group of missionaries arrived who were under the leadership of Thomas Hanger, a kind and loving missionary of the Mennonite church who saw in her the potential to serve, and how sharing her life testimony could be of great help to other families, especially women going through the same situation of domestic violence that she had gone through. In this way, Leticia found herself immediately going to biblical foundation and missionary training.

At present, God has given her a husband who loves and respects her. Although they have gone through difficult processes, they have also seen how the faithful hand of the Lord has strengthened and helped them.

The Bible says in 1 Corinthians 1:27-29 … “But God chose the foolish things of the world…, God chose the lowly things of this world …, to nullify the things that are, so that no one may boast before him.” Her heavenly Father had a big plan for her life and the life of her husband and children. God is a good father who is tender, slow to anger and of great mercy who knows our condition as humans, as dust that will return to dust, who sees in our lives potential even though others find it hard to see.

Currently Pastor Leticia Cortes works hand in hand with her husband Fernando Loyola Centro de Alabanza in Philadelphia, leading and pastoring the church, and taking biblical and theological courses at the Hispanic Anabaptist Biblical Seminary (SeBAH). Pastor Leticia also offers advice to people like her, who have gone through situations of domestic violence helping them to move on, showing them that it is possible to get out of those situations and giving words of encouragement to love and value themselves; and above all, telling them to get on, as the children´s song says, to the gospel train that gives new life.