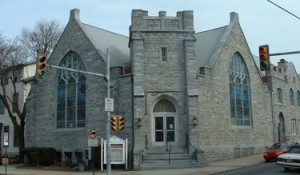 A car pulled up to a fellow worship team member and me while we were talking on the steps of Nueva Vida Norristown New Life (NVNNL).

“Excuse me, sir—are you still giving computer lessons at the internet café?” the woman shouted.

As our internet café is not often frequented these days, I was shocked that it was still something anyone cared about. I then realized this represented what NVNNL means to the people of Norristown, PA: a place of unity, peace, warmth, familiarity, and sanctuary not valued for how many people it helps, but how it helps those in need.

Nueva Vida Norristown New Life was formed by three churches—one Latino, one African-American, and one African-American and Anglo—combining in 1990. Ever since, the congregation has tried to minister to the community it represents. Interculturalism and integration have become part of NVNNL’s way of life, including bilingual services and a team of pastors that represent different ethnic groups. Surprisingly, this is still considered innovative or even extraordinary by many.

The city of Norristown is racially and economically diverse and can be a zone of conflict and unrest. Our congregation operates as a place of peace and a leader in unity for the town in these times of separation.  Recently, we were named a Zone of Peace by Interfaith Philadelphia’s Zones of Peace initiative, where Franconia Conference executive minister Steve Kriss and leadership minister of intercultural formation Marta Castillo serve on the religious leaders council. Zones of Peace are organizations that “seek unique ways to address the challenges most palpable in their neighborhoods.” NVNNL has actively faced these challenges—hatred, fear, discrimination, poverty—since its birth.

Along with a photo-ID clinic, NVNNL has founded and maintained the Hospitality Center, housing ministry for assisted living, an internet café, and the Precious Life Learning Center (day care and preschool). Members of the congregation are known to help each other and other members of the community with matters such as translation and transportation as well.

Things such as state IDs, internet access, and computers are taken for granted by many; the desperation the woman in the car showed reminds me that they are a luxury to some. Lacking necessities makes fear and suffering the norm for many. NVNNL’s congregation understands this, and our ministries focus on this fact of life. In addition to that, racial reconciliation efforts are present within our church to spread peace to those who seek it.

The representation at NVNNL is great, but we believe that the inclusion we practice is not “special;” it is simply a demonstration of the teachings of Jesus. Minister of Worship Sharon Williams states that this unity should be practiced “especially in the church, because valuing people more than personal beliefs comes from the gospel. When you allow yourself to do that, it makes life much more rich.” Associate pastor Ertell Whigham adds: “This is just our way of life. The true ‘award’ is the obedience that honors God.”

Although some congregations look to NVNNL for guidance when it comes to bringing different cultures together, we still have a long way to go. Nonetheless, we try our best to offer some peace to those in our community. We do what little we can, and trust that our ministries will grow as we continue in them. We pray that more and more people from all backgrounds join our congregation and that we can touch new lives each day.

The church asks for your prayers that they would increase the number of strong relationships in their community and more people in need would find them, for members of their congregation with health issues, and for further fellowship and unity within their congregation.