Eastern District and Franconia Mennonite Conference again gathered jointly for fall assembly, November 2-3 at Souderton Mennonite Church. Under the theme of “We are one in the Spirit, through the bond of peace,” over 300 persons gathered for a historic reconciliation worship between the two Conferences, who share an origination in the Mennonite settlement of the Philadelphia area, but separated in 1847 over differences in practice.

The worship service was planned as part of a second phase of process leading toward the possible reconciliation of the Conferences in 2020.  With multilingual worship that highlighted the conferences’ linguistic diversity, the Spirit was evident in the fluidity of language and singing together between Indonesian, Spanish and English. 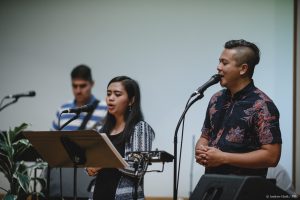 “Leading a multicultural team gave me a small glimpse of heaven,” said worship leader Tami Good of the Swamp congregation.  “Hearing people lift their voices in their own native tongue reminded me of the beauty of God’s creation and the complexity of His colorful design.”

A reconciliatory action led by Jim Musselman, moderator of Eastern District Conference and John Goshow, moderator of Franconia Conference, offered words of apology and forgiveness symbolically, that the two Conferences might “look well upon each other.” 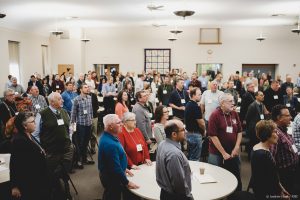 Saturday morning sessions included joint meetings led by the shared structure and identity task force which represents both Conferences, which focused conversation around tables on eight areas in which each Conference operates somewhat differently.  The meetinghouse’s fellowship hall was full to overflowing, with excellent intergenerational representation across the Conference communities. 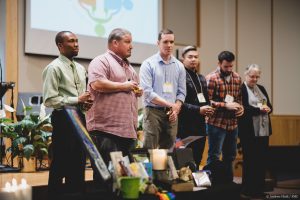 “I especially loved the table full of symbols from each congregation,” said Franconia Conference Assistant Moderator Angela Moyer.  “We are a part of something larger than ourselves.  It is good to listen to what God is doing among us and through us.”

Afternoon sessions included more conversation in smaller “Digging Deeper” groups on the areas discussed in morning sessions, which were led by the structure team members.  The teams received extensive feedback which will be used to form a proposal for a reconciled Conference structure at a joint spring assembly to be held May 4, 2019.

The day ended with each Conference meeting in separate business sessions.  This session for Franconia Conference included recognizing new and re-emerging Partners in Ministry with a greeting from Carlos Martinez Garcia of Mexico City who is moderator of the Counsel of Evangelical/Anabaptist/Mennonite Churches of Mexico.  This association was begun by mission workers from Franconia Conference and will celebrate their 60th anniversary next year.  The Conference also recognized new partner Slate Hill Mennonite Church of Mechanicsburg, who sent representatives for the first time.

San Francisco Chinese Mennonite Church was welcomed as a new member congregation after a year of relating and exploring the meaning of membership with a Pennsylvania-based Conference while being from California.  Pastor Joshua So along with his wife Anita attended the assembly to represent the congregation.  San Francisco Chinese joins three other communities from Southern California who joined last year, and will be served by Jeff Wright as the California-based leadership minister.