By Gwen Groff, Pastor at Bethany Mennonite Church, and FMC Board Member

We were just one or two days into our Mexico trip when Steve Kriss, Executive Minister of Franconia Conference, said, “I think all they really are asking for from us is for relationship.”

In the end, I believe that was the purpose of our Franconia Conference visit to Mexico: exploring and deepening relationships. Two Franconia Conference board members, Angela Moyer and I, and our Executive Minister, Steve Kriss, traveled to Mexico City,  Puebla, Oaxaca, and Toluca and visited various congregations, pastors and leaders of Conferencia de Iglesias Evangélicas Anabautistas Menonitas de México (CIEAMM) for a week.

Franconia Conference had helped to create CIEAMM in 1958, but the formal relationship ended about a decade ago. Our hosts for the week were CIEAMM’s conference moderator, Carlos Martinez Garcia and one of CIEAMM’s pastors, Oscar Jaime Dominguez Martinez. Together we visited congregations that had been planted and supported by Franconia Conference sixty years ago, as well as new ministries that have been emerging.

We first worshiped with Iglesia Maranatha in Puebla. Children and youth were fully involved in leading the service. Over a meal of tostadas they enthusiastically invited Franconia Conference youth to please come and help them with their summer Bible School this July.

The following day we traveled to Casa de Esperanza in Oaxaca, where the congregation meets in the home of Luis R. Matias. We sang and had a short Bible study and a long meal of the local tortilla-based, tlayudas. We met with college students and young adults who are strongly committed to working for justice.  We heard about their dream of a place to help meet the needs of Central American refugees passing through their town. The Oaxacan leaders wish for more training in conflict transformation. The musical gifts in this community were abundant, and their warmth and joy were immense. We ended the day with tea with Luis at a cafe where his daughter Paloma was singing and playing guitar. Luis said, “How good is this? My daughter is being paid to sing to me while I eat!” 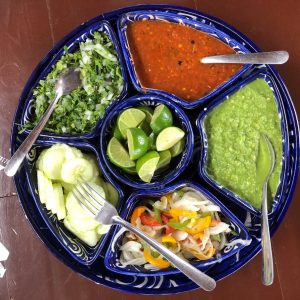 The following day was a travel day back to Mexico City ending with a taco meal with the congregation at Fraternidad Cristiana Nueva Vida Espartaco.

On Sunday, we worshiped with six of the congregations of CIEAMM. Steve shared a sermon on 1 Corinthians 12:12-26 “In the body of Christ, there are different parts, but not walls.” As usual, our worship concluded with a delicious meal together, and gifted musicians sang, drummed, bowed, plucked and strummed while we fellowshipped. We were overjoyed to see Ofelia Garcia and Victor Pedroza who had recently returned from 8 years of ministry in Chihuahua with colony Mennonites. Ofelia will be coming to Franconia Conference this September to share a weekend Sistering retreat with our Spanish-speaking sisters. During our time here, one seasoned Mennonite agency staff person shared with Steve some concrete advice about partnerships between the United States and Mexican church groups: Always relate as equals; never make the relationship about money; if money is exchanged, let it pass through conferences and congregations, not individuals; if you visit with a group, always include youth in the group.

A visit to Toluca was our last journey. We met with Juan Carlos Maya and Sara Zuniga, leaders at Centro Cristiano. Sara’s mother was one of the first Mennonites Ken Seitz baptized, just before Sara was born. In the evening, we relaxed together, a small group of Anabaptists, sitting around an outdoor table in the plaza, listening to a band, watching the dancers, reminiscing about parents who gave up rumba and salsa dancing when they became Mennonites. At breakfast Sara showed us photo albums of her family that included Mennonites we know as Franconia Conference missionaries.

On Monday, we visited their community center and listened to a passionate power-point presentation (it’s not an oxymoron). These Anabaptists in Toluca teach children to play musical instruments as a part of an orchestra, as a way of understanding the body of Christ. With group music lessons they are building a community. Juan Carlos and Sara showed us plans for their building expansion and introduced us to a neighbor with a brick-making operation. When Juan Carlos walked the dusty streets of Toluca, children ran to him and hugged him and walked arm in arm with him. Angela observed, “He is what Jesus would have been like if Jesus had made it to 60.” His understanding of ministry is a movement from “solidarity first, then Jesus Christ, ultimately Koininia.” He said the opposite of this is “ego first, then hedonism, which ultimately leads to capitalism.”

Elders in these Anabaptist congregations who have been in leadership positions in their churches since they were young are intentionally stepping back in order to make space for new young leaders and to mentor them.

Our visits ended Monday evening with a meeting and meal with leaders from the congregations in Mexico City. They talked about their dreams for their congregations. Women pastors were especially warm in their welcome and enthusiastic about sharing their work and interest in receiving more training in theology and ministry.

What if all we want is relationship? People repeatedly told us, “You have to come back. I can’t visit you, you must come here.” This was Angela’s fourth trip to CIEAMM congregations in Mexico, Steve’s third visit, my first. I learned much from my more fluent Franconia traveling companions. We three were grateful for the generous, meticulous planning of our CIEAMM hosts, Carlos and Oscar. We in Franconia Conference have much to learn much from our Anabaptist sisters and brothers in Mexico.

I was grateful for one theological observation Carlos made in passing. He said, “Christianity is a religion of travel.” A cynical person might suggest that Carlos’ assertion is a bit self-serving. After all, he is a well-traveled Mexican Conference Moderator, journeying through Mexico, visiting churches with a group of Mennonites from the United States, about to embark on a visit to Kenya next week; of course he would believe Christianity is a religion of travel. A cynic might also suspect that my enthusiastic agreement with Carlos is colored by the fact that I’m the Franconia Conference board member from Vermont, grateful for a trip to sunny Mexico in early April when there’s still a foot of snow on the ground at home. Of course we all want to believe Christianity endorses travel!

But I believe without cynicism that Carlos is right. Christianity started with journeys. Jesus walked hundreds of miles, and he and his disciples got in a boat and “crossed over to the other side” of the lake far more often than was strictly necessary. Think of the apostle Paul, Carlos said, who undertook many missionary journeys to spread the good news of Christ. In addition to what we bring when we visit, travel puts us in a new position to receive.

Traveling makes us curious, vulnerable, and open to being wrong. Our bodies get tired. We may get a bit sick. We do not fully understand the language. We listen hard. We may break cultural rules we don’t even know exist. We laugh at our mistakes. All this is a good posture for sharing the story of the self-emptying Christ, for deepening our own faith, and for building relationships.