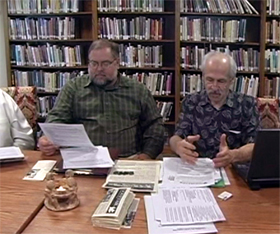 In the 1980’s I began to request volunteers from denominational agencies because I noticed a growing need for human services workers in the area. I had gotten into human services by volunteering myself through Mennonite Central Committee’s (MCC) PAX program. Specifically, I worked with people with disabilities and was an “orderly” in West Berlin, Germany for two years, instead of going to Vietnam. Having experienced a life-influencing time of voluntary service, I thought this would be an excellent opportunity for someone who might be interested in the field. However, this area was considered too wealthy and, with the concept of voluntary service fading in the US, it was increasingly difficult to find volunteers; as a result units were closing and urban area became the focus.

However, about two years ago I was talking to a representative from Christliche Dienste, a German Mennonite agency which is responsible for sending German volunteers around the world, including Peaceful Living, in collaboration with MCC and Mennonite Mission Network’s Mennonite Voluntary Service (MVS) program, and discovered that volunteers were not always located in economically depressed urban areas. When I approached MVS this time, they informed me of a new approach, “If a congregation will sponsor a unit, so will we.” They also have a new initiative to integrate urban volunteers in the suburbs, which aligns with our approach.

During this time a member of my small group at Salford Mennonite Church brought a new study guide: “Healing Healthcare: A Study and Action Guide on Healthcare Access in the United States” which is a study guide for congregations, published by the Mennonite Church USA, surrounding key issues of healthcare access. We began to talk about this and spun off in all directions, from the 45 million uninsured to Medicaid cuts and limits in the federal budget. We decided that one area we could make a small difference was to try to find volunteers to respond to some of the unmet health care needs in our own neighborhoods. We then sent a recommendation for a MVS Unit to Salford’s Justice and Peace Ministry Team. They in turn recommended it to the church board. In February of this year the congregation voted to accept the proposal.

There are multiple needs and opportunities for volunteers in our area. Around 1,500 people with developmental disabilities are waiting for services in the Montgomery and Bucks Counties. Hundreds of internationals are moving into our area, some refugees from Iraq, needing language training in order to find work. An agency which teaches English as a Second Language is maxed out with 400 people enrolled in their classes and 500 more on its waiting list. Another local human service agency that provides services for troubled youth and families, told me the majority of their staff live out of the area because there is no affordable housing nearby. We have a chronic staff shortage of human services workers in the Bux-mont area. There is already interest expressed from six local agencies, including Peaceful Living, for volunteers from this unit.

While we are waiting for approval from Mennonite Mission Network for this specific MVS unit a committee of members from Salford has formed to begin planning. We have decided to call this the Greater Philadelphia MVS house and aim to attract volunteers from both the US and abroad. The unit will recruit volunteers from six different sources, including Mennonite, Catholic, and Muslim agencies. We want our community to model our Anabaptist values of service and loving reconciliation. The Lord has already blessed us with a gifted committee, prayerful support, and several necessary resources. We hope for continued support as the project moves forward.