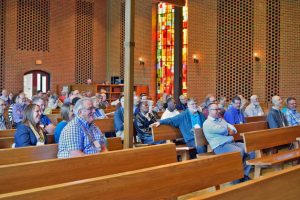 What transpired at this assembly likely exceeded everyone’s expectations. The members of the joint Structure and Identity Task Force guided us through their prayerfully conceived recommendations for an annual assembly, conference board structure, delegate representation, member congregations, and Conference-Related Ministries (CRMs). Delegates shared questions and gave thoughtful feedback to the task force members in break-out groups. The positive spirit and “humble confidence” of the task force (as noted by Steve Kriss, Franconia’s Executive Minister) was contagious.

The recommendations represent the best practices of both conferences’ cultures. Careful consideration was given to the representational needs of all our congregations according to size, ethnic backgrounds, and locations. The task force also noted areas that need further discernment: procedures for delegate voting, CRM participation, receiving new congregations, and of course, a new name for the new conference.

What should have been a boring trudge through a proposal for reorganization and new structure was an amazing gift in our reconciliation process, enlivened by the Holy Spirit.

Eastern District’s Spring Assembly style is delightful. Scott Roth (Eastern District executive minister) “strongly encouraged” delegates to “brag” about how God is working with our congregations to share the gospel with our communities. Time for informal conversations was deliberately left open in the assembly schedule. I had several interesting conversations with delegates of different demographics.

Some people acknowledged the real potential for “the big fish to swallow the little fish.” But my Eastern District friends reminisced about cooperative, fruitful Eastern District and Franconia efforts in lay leadership training, prison ministries, education, and missions dating back to the 1960s. Franconia delegates anticipated that a new, joint conference won’t change the day-to-day life of their congregations. In many situations, reconciliation between neighboring Eastern District and Franconia congregations has already been found. Delegates from our newer congregations are patiently waiting for this work to be accomplished and are glad to be witnesses to the possibilities of this reconciliation. All agreed: why have we waited so long?

During lunch, Aldo Siahaan (Franconia Leadership Minister and pastor of Philadelphia Praise Center) led our “mixed” table in a fun conversation about possible names for the new conference. After identifying a few realities such as our conferences’ expanding geography and offering some trial suggestions, “Mennonites Without Borders” seemed to be the most satisfying idea!