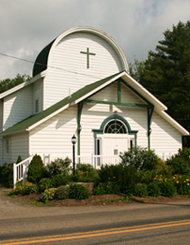 Lakeview Mennonite Church is one of the more remote outposts of Franconia Conference. It is located in the hills of rural northeastern PA and began in the 50’s when several young, adventurous Mennonite families moved up here to farm and plant a church.

Seven years ago, our most recent pastor and his wife were called to another church after 16 years at Lakeview. We were left pastor-less.

Through the ministry of an interim pastor we decided to be officially “Congregationally Led”. This is how it runs: We have a rotation of speakers which include a pastor from a Wesleyan church in the Binghamton, NY area, one of our own members and a Catholic nun! On months when there is a fifth Sunday, somebody from conference has been coming up to speak for the past year.

The New York pastor is available for counseling and another local pastor visits people in our community and congregation who are sick or struggling. Members of our worship committee rotate and take turns leading worship. Our music is varied, ranging from traditional a Capella hymns with 4-part harmony to contemporary praise and worship music. Our members are about 50% local people and about 50% people who travel at least a half an hour because they want to attend a Mennonite Church.

One of the concerns with our current arrangement is losing our Mennonite connections, so we are thankful for having a conference speaker every 3 months or so. Interestingly, the Catholic nun has been intrigued by the Anabaptist perspective and has often brought messages that focus on the teachings of Menno Simons and others.

We have many outreaches to our community. Sixty-some years ago, our church started out with a two-week Vacation Bible School (with help from “down state” Mennonites). Our Sunday School is small but mighty and we continue to have a not-very-big, but growing 1-week VBS each summer.

Because we don’t have the expense of a pastor’s salary, we do have funds to help people in the community in need. When our members learn of somebody in difficulties, they feel free to bring these situations to our council to see what we can do to help. Often the gift of money or purchasing basic necessities (for instance, heating fuel) is just the needed boost. We also do things like having wood cutting parties to help neighbors who can’t do it themselves.

A couple years ago, several of our members decided it would be good to start a Christ-centered 12 step program called Celebrate Recovery. Because of our small numbers we have joined with people from several other churches in the community to do this. We launched the program in September of 2018 and are praising God for lives being changed (including ours) in the town of Susquehanna.

A few months ago, Steve Kriss encouraged us to consider hiring a part-time pastor. As we discussed this, we were very reluctant to abandon the people that had helped us so much through the past 5 years by bringing good messages, visiting and counseling. We are discerning together what that might mean into the future.

Thank you for offering to pray for us! We think this is a critical time for us but also very exciting time. Is the Holy Spirit up to something? We think so! Your prayers are greatly appreciated.

The Ministerial Committee met on September 4:

Update from Noah Kolb, Pastor of Ministerial Leadership, on behalf of the Ministerial Committee

On April 4 the Ministerial Committee approved Connie Detwiler for ordination as co-pastor at Lakeview Mennonite Church. Her ordination was on May 6.

Rose Bender was approved for ordination on April 4 as the pastor of Whitehall Mennonite Church. Her ordination is being planned for May 27.

Franco Salvatori has been called by the Rocky Ridge Mennonite Church as their permanent pastor. He was installed on March 25.

Joyce Hunsberger was granted a license for Christian education and children’s ministries at Salford on April 29.

New Life Fellowship in Northern PA has closed. Phil Maenza who pastored the congregation for more than ten years works in the community. Since he is no longer the pastor of the congregation, his specific ministerial license will cease.

After receiving his MDiv, my husband told me, “Hon, we are on an adventure.” Here I am fifteen years later, shaking my head in wonder and commenting – Are we ever!

I grew up on a dairy farm where I had wide open spaces to play, explore and use my imagination. I have always loved the clear sky at night dotted with thousands of stars and have appreciated God’s creation in many ways. I don’t remember a time that I didn’t feel a connectedness to God.

Perhaps it would be easier to write my story about becoming a Mennonite pastor if I were a cradle Mennonite. My ancestors were not from Switzerland, Germany or Russia. They were from England and Scotland and were very different from the Anabaptists.

I was baptized as a baby and grew up in a Methodist church. During my childhood I attended the Lakeview Mennonite Bible School and occasionally their Sunday School. As a family we didn’t leave the farm much so VBS was my vacation and I loved it. I sang songs and learned Bible verses and stories which I have not forgotten. It was my social outlet and connection with other Christians which was unique to my family of origin. As a teenager I had a strong Christian peer group and one of my best friends was a Mennonite. These formational years certainly had an impact on my spiritual growth.

Eventually I married one of the local Mennonite boys, Blaine Detwiler. I became a member of the church where he grew up. This was the same church where I had attended VBS. We were in the process of buying the family farm when his calling to become a pastor transpired. We sold the cows, packed our bags and moved to Harrisonburg, Va., where he attended Eastern Mennonite Seminary. I audited classes when possible and began to understand more of who I was as a person and also my worth as God’s child. I learned that God’s grace grows in private places of prayer and I found that God has come near to restore and make things right…another milestone in my spiritual growth.

After seminary we returned to our home congregation where Blaine was asked to pastor. My role as his wife has included partnering and walking with him on this journey of ministry. Over the years various folks in our congregation have pointed our that I have pastoral giftings that differ from Blaine’s, which make us a good “team.” I have pondered these observations and words of encouragement for some time.

Four years ago at our annual church retreat, Noel Santiago and a woman named Jeanette Phillips, prayed for me. I hadn’t met either of them before. Their prayer included the following, “God has been calling you to a ministry for some time and you’ve been keeping this hidden in your heart.” Wow, I didn’t know whether to laugh or cry, so I did both. Those words resonanted in my soul like nothing before and I felt God saying, “It’s time.”

Sometime later, during group spiritual direction, a gentleman mentioned that he strongly felt I have pastoral giftings and needed to begin to pursue my calling and consider becoming licensed. I began to discern this more with our church elders and council, my spiritual director and other persons in the congregation. All have been encouraging and affirmative. I am humbled and excited as the “adventure” continues.

I recently completed an Anabaptist History and Theology course which widened my understanding of the word “radical.” Our Anabaptist ancestors were of that vein, in the deepest of ways. They loved Jesus and lived the Sermon on the Mount without a thought given to another way. I was amazed to discover that women played just as an important role in Anabaptist witnessing as the men. I discovered that over a third of Anabaptist martyrs were women. I pray for the dedication and courage they demonstrated as I follow the stepping stones of these faithful ones.

Possibly my calling to ministry began a long time ago in the wide open spaces of the farm where I realized I have been known and loved by my creator. The brightest stars on a clear night remind me I am never alone on this journey and a falling star reminds me of the activity of God’s spirit. I was told years ago that my grandma prayed that someone in our family would become a pastor. The process of discernment regarding my calling and licensing has caused me to become relentless in praying that I may become all God intends, for His glory and makes me realize the prayers of a grandmother can be very powerful.