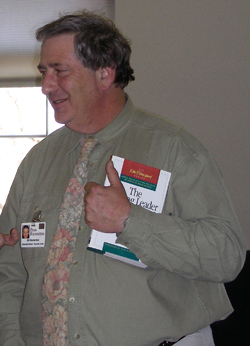 Charismatic. Selfless. Fearless. Great sense of humor. Deeply spiritual. Larger-than-life. These adjectives describe a man whose gifts and calling touched more lives than he ever realized. They tell the story of a devoted husband, father, grandfather, clinician, and colleague who had an eccentric affinity for chasing storms during his leisure time and an even stronger passion for serving others while â€œat work.â€ These words donâ€™t reveal the deeply troubled part of a genuinely compassionate man who spent his life helping others but who, in the end, could not help himself.

On February 16, 2007, Bill Blumenthal, Associate Director of Penn Foundationâ€™s Recovery Center, chose to take his own life. He left behind a shocked, angry, and grieving network of family, friends, and colleagues struggling to understand Billâ€™s decision and to overcome their own feelings of helplessness and guilt at not being able to save him. As one man put it at Billâ€™s memorial service, â€œBill lost his way. That means I also lost my way.â€

About Bill
During his 15-year tenure at Penn Foundation as an addictions counselor and administrator, Bill positively impacted countless persons struggling with debilitating addictions and their families.

He brought a unique perspective to his role; like many of his clients, Bill had struggled with addiction and depression. Through his experience of recovery, Bill heard his calling to become an addictions counselor.

Where Were the Warning Signs?
â€œHow could this happen, especially in an environment
like Penn Foundation where there are countless professionals trained to detect signs of suicidal risk?â€ The answer lies deep in the despair of a man suffering from a recurrence of depression that led him, unknown to those around him, back into relapse.

People, both at work and at home, had noticed Bill struggling with an increased level of stress but nothing that signaled the depth of the problem. He had gone back to his psychiatrist and was being treated for depression. What no one suspected was that, at some point, Bill had also started self-medicating with prescription medicines his doctor did not prescribe and that he was, in fact, in active relapse. Until the night before he took his life, Bill kept this fact hidden from everyone around him. When it came to light, Bill could not face the implications this had for his family, his work, and his life. And his depression had narrowed his ability to conceive that there might be a way out of his despair.

As hard as it is to understand and accept, what happened to Bill happens to a lot of people with the difficult and complicated illnesses of addiction and depression. They often believe that there is no resolution to their pain.

Picking Up the Pieces
After learning of Billâ€™s tragic death and acknowledging the range of emotions that would inevitably follow, John Goshow, Penn Foundation CEO, immediately sought outside professional help for Billâ€™s colleagues. â€œI did not try to control anyoneâ€™s feelings,â€ explains John. â€œThe important thing was to give staff time to heal and the opportunity to grieve in their own way.â€

In addition to offering individual and group counseling to employees, staff were invited to 15 minutes of daily prayer every morning for two weeks. Although he was struggling with his own unanswered questions and emotions, Chaplain Carl Yusavitz found comfort in talking with staff. â€œWe were all having the same emotions and in that, learned to take care of each other,â€ says Carl.

Moving On
â€œThe important thing for any church or organization
forced to endure a tragedy like this is to be open and honest about it,â€ advises John. â€œItâ€™s acknowledging that emotions are going to be raw; itâ€™s embracing those emotions; and itâ€™s providing several different avenues to navigate the overwhelming grief.â€

Adds Carl, â€œScripture can offer tremendous comfort in the midst of a difficult time such as this. It can come alive in a way that it never did before. God uses life situations to speak to us, and the Bible provides the text.â€

â€œWhen I was fighting cancer, Bill once asked me â€˜Whereâ€™s the gift?â€™â€ says Cyndy, Billâ€™s wife of 21 years. â€œAt the time, that was the last thing I wanted to hear. But it stuck with me. I think about that question now as I deal with Billâ€™s death. There are gifts even in the hardest times. If we can learn something from Billâ€™s experience that can be used to help others facing these issues, then that is truly a gift.â€