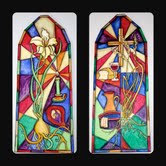 Taftsville Chapel Mennonite Fellowship is a small, stable congregation in mid-central Vermont.  We meet in an old school house in the rural village of Taftsville, which is situated in the Ottauquechee River valley between the tourist towns of Woodstock and Quechee, along the US Route 4 corridor.

The congregation was formed by Mennonite families who had all temporarily moved into the area for 1-W Alternative Service to the draft (most working at a local teaching hospital) in the late 1950s to early 1960s. Many of these families decided to stay, and the congregation has grown into a vibrant, healthy body. Our congregation has remained stable at around 60 members, with some ebb and flow as families move into and out of the area for school and work.  Currently, we are about 50% ethnic Mennonites, mostly from Pennsylvania, and the rest represent a wide diversity of spiritual backgrounds.  The majority of our members are employed in the fields of medicine or education.  We range in age from newborn to 94.

Our geographic area is called “The Upper Valley,” which is simply a convenient and loosely defined term referring generally to the middle section of the states of Vermont and New Hampshire bordering along the Connecticut River.  We have dedicated members who travel as much as an hour to worship with us at Taftsville.  We are not a ‘community’ church as such, since none of our members live in the immediate village of Taftsville.  Instead we represent a wide geographic area of rural communities, home towns and workplaces.  Even with the geographic challenges, our community at Taftsville is a close-knit one, and we look for ways to be involved in each others’ lives.

Currently, the leadership at Taftsville is shared among several small teams, and individuals on those teams are either volunteers or appointed by group discernment according to strengths and giftings.  The Administrator serves as leader of the Church Council, which is made up of annual voluntary slate positions and is concerned mostly with the programs and finances of the church.  The Pastoral Care Team is invited by the Pastor to share the pastoral care needs of the community.  The Leadership Team is discerned by the congregation, serving alongside the Pastor to oversee the vision, teaching, and sermon direction and other spiritual needs of the group.

We have discovered that our mission in the Upper Valley is primarily a place of healing.  We describe this as being “preparers of good soil.”  We have found that many people’s hearts are unable to receive the gospel because of hurts, traumas, and confusion, sadly often at the hands of other Christian churches.  We provide a safe place of welcome, rest, and grace and delight to find that broken people who become part of our faith community begin to learn to trust again and grow in their own discipleship and faith.